Visions in the charnel ground 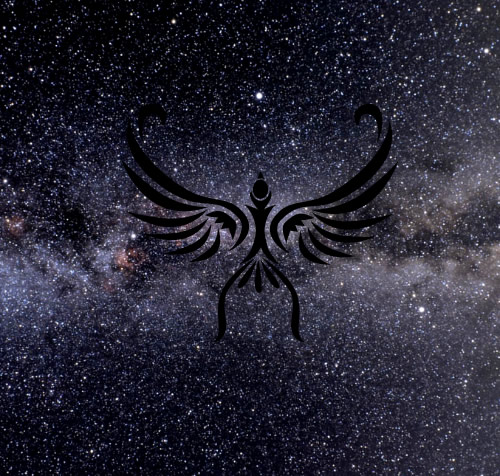 I fell into the sky.

I hurtled, ever-faster, toward the stars. Screaming, tumbling, twisting, kicking: desperate to find something to hold onto.

Cold night air howled past, tearing at my face.

Then my wings caught the wind.

One caught first, and the wind nearly tore it from my shoulder.

I screamed, the long ragged shriek of an eagle:

Then the other wing met the air, and flipped me upright; and I remembered how to fly.

Clumsy at first, then confident, I spiraled up. Far below, even on this moonless night, my eagle eyes could pick out single leaves in the forest canopy. Starlight glinted on the river; and now I was high enough to see Suhki’s village: a ghost town, emptied by plague.

I flew south, and passed over my own village. How small it looked, toy houses, strips of fields in a clearing. There was nothing there for me now. Still, I circled over it, picking out the hut my father had built; where I had been born; where my mother was murdered. Where I had—

Better not to think of that. I turned away, and flew on south.

Leaving my useless former life behind, I exulted in flight, in the power of my wings, in the slipping buoying force of the air, in the unrolling landscape below. I passed over the Ganges at sunrise, and marveled at its breadth, at the water reflecting the mango shades of the dawning sky.

Warmed by the sun, I few ever faster, and higher. Mountains rushed beneath me, and a desert plain.

I could find no limit to my speed. Day turned to night, and then night to day, passing it seemed in minutes. Still speedier I went, dizzy, until night and day flashed by, and then flickered faster than eagle eyes could see.

A couple—a man and a woman—sat on the bank, looking out over a lake.

The man wore a loose white robe. But it was the woman’s that caught my eye, though neither garment looked like any I had seen, nor heard of in stories.

Her dress was silk, the blue-black of the center of the sky as night falls. Two silver bats clasped shoulder straps, gathering folds of cloth that held her breasts high. A twisted coil of many silver and blue-black ribbons belted the dress just below them. The silk fell in pleats to her knees. Beneath, I could see that a second belt rode just above her hips. That held in place an underskirt of the same fabric, which reached to her ankles. The wide border of each skirt was embroidered in silver thread, spangled with countless tiny stars.

Her arms were bare; around her wrists and above her elbows she wore silver bands in the shape of snakes. At her neck was a choker, silver again, ornamented with a row of grinning skulls. Her long hair fell free.

She rose, and the man stood also. She danced: slow, sinuous, sensual. But the man was looking again at the lake; and he began to chant. I could not understand the language he spoke. Facing the water, he made strange gestures.

The surface of the lake boiled, and burst.

An enormous black snake rose from it. Water sheeted off its scales. Its body was thicker than a man’s middle. It wore a crown of gold, set with black jewels. Though its head rose more than man-height above the surface, most of its length must have been coiled deep below.

The man, unsurprised, finished his chant and bowed low. The woman also ended her dance—but did not bow.

The man sat and wrote rapidly on dried palm-leaf, nodding as the snake’s deep voice finished each cadence.

Again I understood nothing.

The woman sat on the bank, her arms clasped around her knees. She watched the snake speak, and grinned like a lunatic.

I was in a dark circular pit, a shaft, not much wider than I could reach on either side. The walls were lined in stone. A dim light descended from far above. I hovered—I could not say how—twice a man’s height above the bottom.

A man sat there on the dirt; a man in chains. It was my uncle.

He looked up and saw me and seemed surprised. He spoke to me—or so it seemed; his lips moved, but I could hear nothing.

“Uncle?” I asked, and he spoke again, but there was no sound in my ears.

There was a crackling sound, like walking on dry leaves, and then I could hear him: “Surya! Can you hear me?” His voice sounded as if coming from the bottom of a well, with a booming echo.

Crackling again, and whatever he said was lost.

“Surya! Don’t try to say anything! Just raise your hand when you can hear me!”

“Shut up!” he yelled. “Damn these astral connections to hell! They never work right. Can you hear me? Raise your hand!”

I did as he said.

“Good! Now listen carefully. It’s extremely important that you take a message to—”

And then cracking again. I waved my hand frantically, but there was only silence as he talked, then frowned, and glared, and cursed violently and noiselessly.

Half of him slid sidewise. The rest rippled like a reflection on a wind-blown puddle.

Abruptly, all motion ceased. His wavy forearm and upraised fist were as a statue.

Then there was a popping sound, and total darkness.

There were men around me: a dozen of them, dressed as monks. Grim-faced, they too were looking across the plain.

Turning back to look out, I saw movement. In the murk, in the distance, a great dark mass of men, marching toward us.

There was the stench of a slaughter-pit, a reek of decay.

Wait! I am dreaming… the dakinis… it’s the smell of the charnel-ground that has put me in a nightmare.

I watched the approach with rising terror.

I have to wake up! I thought. But I could not.

Close below now, they walked awkwardly, shambling with stiff legs. They carried axes, maces, black swords. Even in the gloom I could see the white of bone, some with legs or arms stripped of flesh, some further gone, ribcage or skull fully exposed.

The army stretched back as far as I could see. Untold myriads of the dead.

I walked up a valley. The sky was blue, the grass was green.

Beside me was the River of the Black Mother—a clear-flowing stream. High mountains rose on either side, white-capped.

The village I had been born in—the village I had left behind, setting forth on the Quest of the Riddle of Life and Death—lay on the Ganges plain. Before my eagle flight, which seemed now from another life, I had never seen a hill or a valley, far less the Himalayas.

This valley was dotted with fruit trees. Sapphire and ruby-red birds sang from the branches and played in the air.

I came to a place where an elegant, arched bridge crossed the river. Beyond, the paved path led up the flowered side of the valley.

It brought me then to a palace, with roofs of gold. Makaras sprouted from the gables.

I mounted a flight of steps, and enormous doors swung silently open. Inside, two rows of pillars, carved to look like banyans, supported a deep-blue star-spangled ceiling, far above.

I walked down the center of the hall, and saw that at the end there was a dais; and on the dais a throne.

On the throne there was a girl, about my age. As I approached, she stood and stepped down to greet me, smiling all over.

“This is the vetali,” I thought.