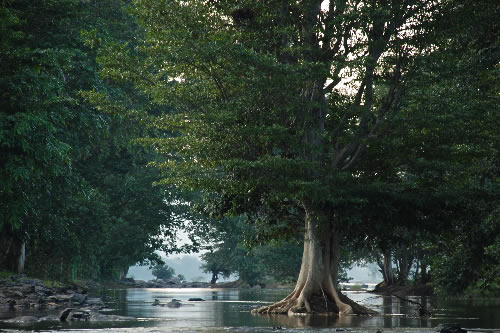 It was Sukhi who saved my life in my fourteenth year. Not by doing anything heroic, but just by being Sukhi.

That year, my life went from merely awful to utterly impossible. I was bored senseless. Living even another year with my hateful foster-family was an unbearable prospect.

And after that, what? I certainly was not going to become a monk. So I would be a farmer, and live and die in a village in which a still-born calf was conversation for weeks; in which nothing more significant than that had happened since I was born; in which nothing would happen unless it were some new catastrophe; in which everything and everyone was loathsomely familiar.

And I was full of vast new, inchoate desires; desires that had no known direction, no possibility of consummation; desires I could not name or understand. Desires for what, I mostly had no idea. It was sex, of course, but I understood that only dimly; and it was not only sex.

The one thing I knew was that I had to get away. Life was a living hell. I thought daily about killing myself to escape; but that sends you straight to the Cold Hell. Living hell or dead hell; the hot hell of rage and desire, or the freezing hopeless hell underground? If I didn’t kill myself, I was going to kill someone else—and it was going to be my foster-mother or her younger son.

I walked out of the village in a blind seething rage. I took the path north, into the forest. I knew it went, half a day on, to a charnel ground, where corpses were left to rot or to be eaten. Few would ever choose to pass that way.

Charnel grounds are the realm of ghosts and demons, hyenas and tigers, bandits and spies. I didn’t care about danger, I thought. I welcomed it. I needed something to happen—even if it was sure to be awful, because everything in life was awful.

The sky was overcast as I walked into the forest. It was dark and wet, the path faint and overgrown. It wandered among towering shala trees. Stories say those are the abode of yakshinis—powerful, unpredictable spirits who take the form of beautiful women. The eerie limbs of strangler figs wrapped the shalas, and their twisted roots coiled across the path.

The only sound was black water dripping from the moss that covered everything. Then I heard a big creature crashing through the understory, a hundred yards off. I looked about and seized a large stick. No use against a rhinoceros or wild elephant, but better than nothing. I waited until the noise died in the distance.

I must have taken a wrong turn, lost the path, and turned off onto an animal track. The spongy wet ground turned to mud and reeds. There was a foul smell of rot. I nearly turned back, but there was light ahead. Squidging through the gloomy swamp, I came out of the forest at a river’s edge.

The sun had come out, and its reflection on the river blinded me at first. The forest had been felled on the opposite bank; the yellow-green of the field beyond and the blue sky above were a shock after the forest gloom.

Looking around, I saw there was someone on the far side, a dozen paces upstream from me. At first I thought she was an ordinary girl, sitting cross-legged in a white skirt on the river bank. There was something odd, though. She was perfectly motionless, staring straight ahead at the river.

Many of my uncle’s tales of adventure began with the hero meeting a goddess, witch, or demoness. Or a princess who needed rescuing. Perhaps she had been frozen by a spell? Here, at last, was danger. Something was about to happen.

Uncertain, I watched her for long minutes. Not the slightest movement.

Fear of an evil spirit tempered my excitement. Better to be cautious.

I reached down slowly, letting go of my stick. I picked up an egg-sized river rock, and hurled it at her.

“Mmm. Remember I was younger than you, even,” said the old man.

My shot landed short, splashing into the river. Her head turned slowly and she looked straight at me. I thought I could see a smile.

I walked along the bank to face her across the river. She adjusted her skirt. She had a little painted basket with her.

She was about my age. She did look quite ordinary. I took a deep breath, looked around for crocodiles, and waded on into the river.

My adventure had begun.

The water was shockingly cold as it washed up mid-thigh. It was snow melt from the Himalayas; but I did not know that then. Living on the Ganges plain, mountains were as magically mysterious to me as flying sorcerers or cannibal demons.

I teetered in the middle of the river, where it swirled past boulders; but did not fall. I stopped several paces from her and scowled, trying to assess the danger.

“What are you doing here, then?”

“Escaping my mother,” she said.

“How come?” I asked, and took two steps closer. The chill of the river ran up my back, and I was starting to shiver.

“Because we are brahmins,” she said. She scowled too, looked aside, and plucked a leaf from a weed on the ground beside her.

She tore the leaf in half. She looked up. “What about you?”

“Same thing,” I said, climbing out of the river and sitting down next to her.

“You are a brahmin?” she said. She looked surprised, but pleased. “Your skin is so dark…”

“Oh,” she said. “I thought Buddhists could do anything they liked.”

“My mother says no-caste trash do whatever they want. That’s why the gods made their skin dark, to show they are impure. I’d rather have skin like yours if I could come to the river any time I wanted.”

“Huh,” she said, and nodded. “What happened to your real mother?”

“I wish mine would,” she said.

“How can you say that!” I asked, surprised. I would never dare to, even if I thought it. “You can go to hell for saying things like that.”

“I will anyway,” she said, wrinkling her nose.

Even without trying, the tip of her nose wiggled when she talked. She looked like a rabbit. Her upper lip was too narrow, so whenever she closed her mouth to pronounce m her nose twitched.

I wanted to keep her talking so I could see it happen again. “What’s your name?” I asked.

“Sukhi,” she said. “Short for Sukhadevi. What’s yours?”

“That’s a strange name,” she said, and laughed.

“Sukhadevi” means “Bliss Goddess”; and she was that.