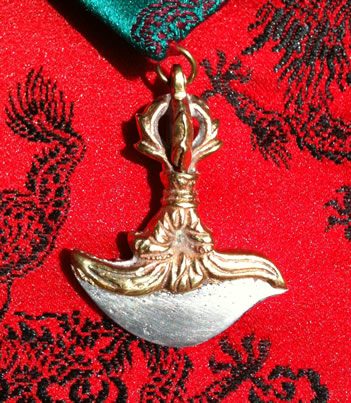 “Mother, what is a dakini?”

She looked troubled. “Why do you want to know, dear?”

I was close to tears. “They said—they said you were a dakini, and dakinis eat people. And dakinis are what make people sick. They said everyone knows you are a dakini because you have black skin and talk funny.” It was true that my mother spoke with an accent, and her grammar was a bit off. I was just old enough to have noticed that. And even my own skin was darker than most of the villagers. “Is it true? Are you a dakini?”

She took me in her lap, and stroked my hair. “I am your mother,” she said.

She bit her lip. “Well… maybe I used to be one… but I don’t eat anyone, not ever.” That was true—she wouldn’t eat meat at all, never mind people. “Never anymore. And you know I make people better, not sick.”

After my father died, she married his younger brother. She did not see much of him. He was a Tantrika, like my father; but he was always away, coming to our village for only a few days, once or twice a year.

My uncle always brought her money when he visited. She was not strong enough to work the field that had been my father’s. But she also accepted payment in kind for her work: curing sick calves, injured children, sometimes broken hearts. The men of the village would have nothing to do with her, but the humbler women respected her help, and I think her kindness.

Although there were plenty in our village who feared and hated her, it was not because she was a dakini that she was murdered. Or only incidentally. Our house was just outside the village, reflecting my family’s role in community life. And one day, maybe that was fatal.

They were dressed as soldiers; but I think they were freelance roving thugs. Perhaps they were mercenaries without a job; or men who had been conscripted, seen the horrors of war, and then summarily discharged. Probably without the pay they were promised. That is how it usually goes.

At any rate, they came to our village, heavily armed, in broad daylight. They came to our house because it was first on the road. My mother saw them coming, and spotted trouble.

“Quick, Surya,” she said. “You must hide in the rafters.” I loved to climb up into the rafters of our little house, where I could lie hidden, seeing and hearing everything that happened when villagers came to visit. “Whatever it happen, you must be quiet—say not a sound!”

I saw and heard everything. I said not a sound.

No one heard her screams but me; most of the villagers were off working in the fields, and our house was nearly out of earshot of the village anyway.

When the men were done with her, and left, and she lay broken and dying on the floor, I came down from the rafters.

She smiled and tried to comfort me, but she had lost the use of her limbs. She could not hold me.

“Surya,” she said, “the kartika.” She gestured with her eyes, because she could not move her neck. Lying on the floor was a tiny metal charm, in the shape of a butcher’s flaying knife. It had been on a silver chain around her hips, under her skirt. She must have worn it there always, because I had never seen it before. When they were stripping her, one man broke the chain and held the pendant up to look at for moment; then he threw it away as worthless.

I went to put the little thing in her palm, but she curled her fingers weakly around my hand, so she held my fist holding it. “Keep it secret,” she said. “Keep it safe.”

The old man was silent for a while.

“Do you know your mother?” he asked then.

“Slightly,” said the young monk. “I have met her on a few occasions.”

“How old were you, when…” asked the old man.

“I don’t remember,” replied the young monk. “I think I must have been about three, when I was given to the monastery.”

“Then perhaps you cannot understand how I felt,” said the old man.

My metablog post “Love in a time of war” explains some of the historical background for The Vetali’s Gift—particularly the civil wars that raged at the time, and the ways Buddhism responded to them.