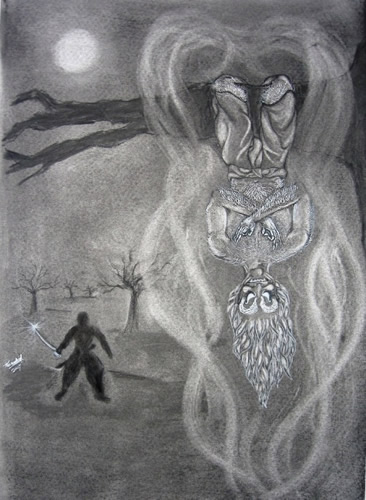 Illustration of the vetala from the 25 Tales of the Vampire

“Tell me a story,” I demanded.

It was the first evening of one of my uncle’s rare visits, after my mother was killed.

“Um—with respect—why are you telling me about all this?” asked the young monk. “I thought you were supposed to teach me the Secret of Life and Death, or something.”

“I am,” said the old man. “But the story my uncle told is personally meaningful for me. Please don’t interrupt!”

“All right. I wish I could be here more often… you need to hear more than stories!” He sighed. “Right… what’s a good story to tell you? Give me a minute…”

I sat and waited impatiently, kicking my seat.

“Right. So, once up on a time, there was a great sage named Nagarjuna. And there was a king named Shankarabhadra. There were seven evil sorcerers, and—”

“I know this story,” said the young monk.

“Yes,” said the old man. “It is The Twenty-five Tales of the Vampire.”

“I have heard that,” said the young monk.

“You may have heard a version,” said the old man. “The story starts with Nagarjuna rescuing the king. The king asks what Nagarjuna wants in return for saving his life, and Nagarjuna sends him to fetch a vampire. The king is brave, but the vampire is wily. It tricks the king into allowing it to tell a story—and when the king interrupts the story, the vampire is able to escape. Then the king has to go back and capture the vampire again, and it tells another story, and—”

“Yes,” said the young monk. “The bit with the vampire is really just an excuse to tell a series of unrelated tales.”

“A ‘frame-story,’ I believe story-tellers call it,” said the old man.

“Why do they do that?” asked the young monk.

The old man frowned and rubbed his nose. “Well… There are several reasons. First, some stories get a slow start. The listener needs to hear the boring beginning bit to understand what comes later; but they don’t know whether that’s worth waiting for. The fictional narrator in the frame-story can give an overview before the inner story starts. That might give the listener enough of a taste that they are willing to wait.

“Or, maybe the beginning of the story is really grim. Then the narrator’s introduction can be comic, so the listener knows the real story will have a happy ending.”

“I see,” said the young monk. “But that’s not what happens in the Twenty-five Tales of the Vampire.”

“No,” said the old man. “Another reason is that when you listen to a story, you enter a new world, created out of words. And you are willing to let the world be as the teller tells it. But that can only go so far, and if the world does not make sense, you will interrupt the tale and argue. By putting the story within a story, the teller of the inner story becomes only a character himself, so you cannot argue with him. Then the inner story can be less realistic. If you wrap it in enough layers of indirection, you can tell a completely ridiculous story and have it seem somehow believable.”

“And then, a story always works some transformation in the hearer. It is not ‘information’; it works on the heart. Although it is made of words, the true meaning of a story cannot be put in words. So the story teller has to stop the hearer from using their ordinary mind to listen. When the teller says ‘once upon a time…’, the listener knows it is time to listen with the heart. But the listener’s mind may still get in the way. To confuse ordinary mind, the story-teller wraps worlds in worlds, until the hearer gets lost, and can listen without judgment.”

“Oh,” said the young monk. “So your uncle wanted to confuse you… But I know the vampire story, so I would not be confused.”

“Perhaps not, and that is your loss. But I think you have not heard the story he told me. There are as many versions of the Twenty-five Tales of the Vampire as there are story-tellers…”

“And this is the story the vampire told him,” my uncle said:

“ ‘Once upon a time, there lived a farmer who had three sons. The youngest son died when he was just a boy—’ ”

“Well, because he was not pure of heart. He had bad thoughts, and the demonic minions of Lord Yama, the god of death, dragged him down to Hell.”

“Oh!” I said. That was a bit of a shock. I knew such things happened, but—

“What sort of bad thoughts did he have?” I asked.

My uncle looked at me closely. “He was angry,” he said. “He was jealous of his older brothers and sometimes wished they were dead.”

I think he could see I was usually angry. I was jealous of my older foster-brothers, and often wished them dead.

“Does that always happen to boys who have bad thoughts?” I asked.

“Well… sooner or later,” he said. “But there are ways to stop being angry.”

“You can use anger to cut itself.”

“Oh,” I said. I had no idea what that meant. I thought for a while, and then asked, “What about the other two brothers?”

“Well, the oldest brother was pure of heart. And the middle brother… not so much. So anyway, do you want to hear the story the vampire told?”

“ ‘One day when they were of age, they determined to set out on a Quest, to seek their fortune in the wide world. Their father pleaded with them not to go, for there are many dangers in the wide world…

Three metablog posts help explain this rather odd episode of The Vetali’s Gift: “Stories of the vampire, stories of the sea”; “The sea of stories”; and “Stories within stories.”