The tale the vampire told

“ ‘One day when they were of age, the two remaining brothers determined to set out on a Quest, to seek their fortune in the wide world. For they were brave and handsome and clever—or at least the older brother was—and their village seemed too small for them. Their father pleaded with them not to go, for there are many dangers in the wide world, and he counted on their work for the farm. But try as he would, he could not dissuade them.

“ ‘Finally, he gave their Quest his blessing. “Never forget,” he said, “that you are Buddhists. Always pray to the gods. And especially in times of great peril; that is a Test of your devotion. If you are pure of heart, your prayers will be answered.”

“ ‘The two brothers set off with light hearts. But they had not gone far when they came upon a band of bandits. The bandits took the little money their father had given them, and abused them most severely. That night they heard the bandits talking among themselves, and saying that the brothers were to be sold as slaves.

“ ‘They remembered their father’s advice, and realized that they had come already to their First Test. So they both prayed. Nothing happened when the middle brother prayed, but a goddess appeared to the oldest brother. She was dressed all in green and was holding a flower.’ ”

“That was Green Tara!” I said.

“Yes,” said my uncle. “ ‘She smiled sweetly, and said “Because you are pure of heart, I will give you a mantra that will free you from the bandits.” So the two brothers repeated over and over the mantra she had given them: Om Tare Tuttare Ture Svaha. The one bandit who had been set to watch over them, to see they did not escape, miraculously fell asleep. The older brother was able to wriggle free from his bonds. Quickly he untied the middle brother, and they slipped away from the bandits’ camp.

“ ‘After many days’ walk they came to a colossal ring of mountains, so high their tops touched the sky. Their road took them to a gate that led through the mountain. A constant stream of people went through that gate, in and out, soldiers and traders, carts and bullocks and horses and elephants.

“ ‘Inside the ring of mountains was a great city, like nothing the brothers had ever seen. They had come to the capital of the king. They marveled at the riches of the town, the ladies in brilliant multi-colored silks, the gilded carriages, the shining temple towers. They had no money, for the bandits had taken it all; but they were told they could indenture themselves.’”

“What does ‘indenture’ mean?” I asked.

“They didn’t know,” said my uncle. “What it meant was that they had to work for their master for ten years, with almost no pay, just enough to eat, and do whatever he said, and they could not escape. And he beat them sometimes.”

“You will never need to, if I can help it,” said my uncle.

“ ‘The man they were indentured to was, by chance, the chief sorcerer of the king. When he saw that they were clever, he began to teach them sorcery, to help him with his work. They learned quickly, especially the oldest brother. But sorcery troubled him, and he was not sure the sorcerer was a good sorcerer—nor the king a good king.

“ ‘After a few years, he said, “Brother, we have come to our Second Test. We must escape this place and find honest work.” But the middle brother saw that the sorcerer was rich and powerful. Eventually the indenture would end, and he would be a sorcerer himself. He did not want to go on the run and have always to hide from the king’s men. In short, he was greedy, and afraid. 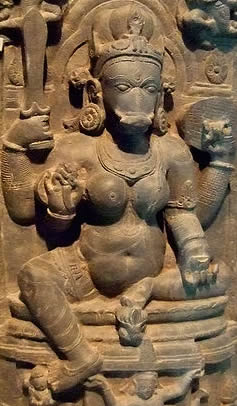 “ ‘So the older brother prayed to the gods, and a blood-red goddess appeared. She was dancing naked and she held a half-skull filled with blood.’”

“That was Vajra Varahi,” my uncle said. “She had the head of a boar.”

“ ‘The middle brother was very afraid, but because the older brother was pure of heart, he prostrated to her, and she laughed like a madwoman, and promised to protect him.

“ ‘So that night, he slipped out of the capital city, and as fast as he could, he headed in the direction of the rising sun—because that was the nearest way out of the kingdom. What lay beyond, he did not know.

“ ‘After many days’ walk, he came to the land of the cannibal witches. There at once he was captured. Because he did not know their secret signs, the witches thought he was an enemy, and they decided to kill him.

“ ‘He realized he had come to the Third Test. Again he prayed, and a terrifying black goddess appeared. She was surrounded by gouts of flame and she wore a necklace of severed human heads.’”

“That was Krodha Kali,” my uncle said. “She grants the power of cutting your own anger.”

“ ‘When she appeared, the witches were afraid. But because he was pure of heart, he was not afraid, and he prostrated to her. She roared like a tiger, said nothing, and vanished.

“ ‘But there was a young witch who saw that he was fearless and pure of heart. She saw that he was brave and handsome and clever. And in an instant, she fell in love with him.

“ ‘That night, she freed him, and they escaped together.’”

“Was she a princess?” I asked.

“But the hero is supposed to rescue a princess, and then they get married,” I said.

“Well, she wasn’t a princess. But she was very beautiful. Or at least the oldest brother thought so; and that is what matters.

“ ‘The witches were furious when they found out what she had done. They chased the young witch and the oldest brother as they ran away, screaming that she had broken their sacred law, and both must die.

“ ‘So she turned and spat on the ground behind her. And where her spit landed, a lake formed. It spread wider and wider, until they could hardly see the witches on the far bank. They were shaking their fists, because witches cannot cross water. So the young witch and the oldest brother went on.

“ ‘But then after a while they could see that the witches had made their way around the lake and were coming up quickly behind them. The witches were gnashing their teeth because they wanted to eat them up. So the young witch took some of the hairs from between her legs, and she blew them off her palm, and where the hairs landed, a black forest of tangled thorn-trees grew up. So the young witch and the oldest brother ran on, hand in hand.

“ ‘Just when they came to a wide river, they saw that the wicked witches had gotten through the thorn-forest and were catching up, close behind them. The witches were cursing and muttering, because they wanted to send demons to kill the young witch and the oldest brother.

“ ‘The river was dry at that time of year, a plain of sand. The young witch and the oldest brother made it across. And when they reached the far shore, the young witch took some of the blood from between her legs, and she shook it onto the dry river bed. And the empty river filled with roaring river-water, which swept the wicked witches away. And that was the last anyone ever heard of them.

“ ‘The young witch and the oldest brother came back to the village where he was born. For he had had enough of the wide world. He wanted now just to be a farmer, and to love his wife.

“ ‘In the village, they found that his father had died. His house had fallen into ruin, and his field was overgrown with scrub.

“ ‘So the oldest brother rebuilt the house, and cleared the thicket, and planted the field; and they lived happily ever after.’ ”

It was the end of the story. I thought for a minute. “What about the middle brother?” I asked.

“Well… he became the king’s chief sorcerer, when the old one died.”

“Oh… Did the oldest brother and the witch have children?”

“Yes—they had one son.” Suddenly, he looked angry. “Now it is time for bed! No more talk.”

I had more questions, but I could see he was not in a mood to be disobeyed, so I went to bed, and thought about the strange story.

“It is a bit odd,” said the young monk. “I have not heard that one before.”

“No,” said the old man. “You would not have… My mother never spoke of the past, so it was years later that I realized it was the story of how my parents met.”

He thought for a moment. “So your uncle was the middle brother in the story?”

My metablog post “Pops and the shudder” helps explain this episode of The Vetali’s Gift.