The sea of stories 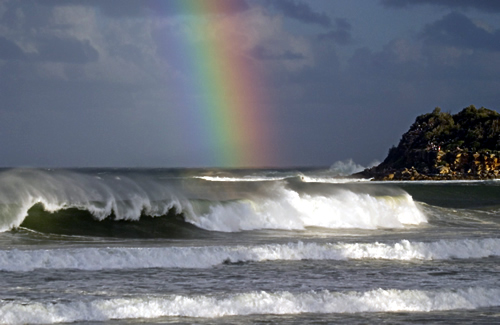 Many authors have taken up the metaphor of a “sea of stories”—which grew out of the Twenty-Five Vampire Tales. Perhaps the best-known recent example is Salman Rushdie, in his Haroun and the Sea of Stories:

So Iff the water genie told Haroun about the Ocean of the Stream of Stories, and even though he was full of a sense of hopelessness and failure the magic of the Ocean began to have an effect on Haroun. He looked into the water and saw that it was made up of a thousand thousand thousand and one different currents, each one a different colour, weaving in and out of one another like a liquid tapestry of breathtaking complexity; and Iff explained that these were the Streams of Story, that each coloured strand represented and contained a single tale. Different parts of the Ocean contained different sorts of stories, and as all the stories that had ever been told and many that were still in the process of being invented could be found here, the Ocean of the Streams of Story was in fact the biggest library in the universe. And because the stories were held here in fluid form, they retained the ability to change, to become new versions of themselves, to join up with other stories and so become yet other stories; so that unlike a library of books, the Ocean of the Streams of Story was much more than a storeroom of yarns. It was not dead, but alive.

Stories are like an ocean in that they are always in flux, and continually flow into each other. Stories do not exist in isolation, but endlessly cross-reference each other. Over centuries, they are transformed gradually, and there is no saying where they begin or end.

The sea of stories is the central metaphor in Will Buckingham’s remarkable book of Buddhish ethics, Finding Our Sea-Legs. He writes that

…we live and breath through stories… but that is not to say that our lives are stories, or that they are story-like in structure. The stories that we weave are multiple, fragmentary, interlocking, in constant motion. We are not stories, but we are ourselves seas of stories, or else we are eddies in the larger sea of stories of which we are a part. But the stories that we habitually weave are neither single nor do they have the tidy structure of beginning, middle, and end that Aristotle claimed was the mark of a good story. Instead, they are a morass of innumerable, half-cooked drafts that contradict and overlap and flow around each other in ceaseless motion. (p. 35)

As stories are re-told, they undergo “a sea-change, into something rich and strange.” My “Tale the vampire told” is meaningful only because it resembles other fairy stories; but its context is different enough that its meaning is rather dissimilar. My “25 vampire stories” is a retelling of the ancient frame-story; but it is also a retelling of some parts of Will Buckingham’s book.

He suggests that we humans use stories as a primary method for making sense of life, of finding meaning in experience. Especially, he suggests that telling (or writing) and listening to (or reading) stories is a means of ethical understanding. I’ll say more about that in an upcoming metablog post.