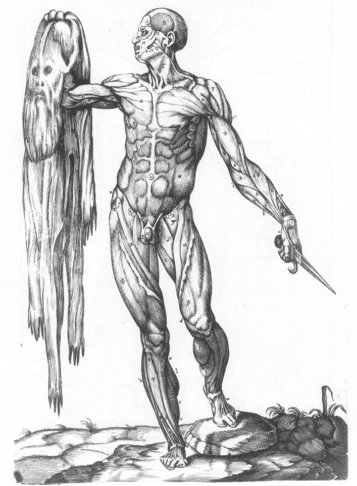 “We are starting at the beginning, aren’t we?” said the old man.

My father was a Tantrika—a Buddhist sorcerer. I never knew him. He died before I was born. He died defending our village… I was proud of that.

On that day, a girl ran into the village, exhausted, sobbing and incoherent. It seemed that her own village, a few miles to our west, had just been attacked and destroyed by the army of a rising warlord from Kannauj. They were marching east.

Our village sent a runner to the nearest garrison town to beg for help; the women and children prepared to flee, and the men—some of them—to fight to cover their escape.

The soldiers arrived minutes later. Our men were untrained, unready, and armed only with kitchen knives and farming tools. The slaughter began—but my father, sitting alone in the common space at the center of the village, singing black words, nearly turned the tide.

He turned the soldiers’ own bodies against them.

One enemy’s brains fountained out of a hole in the top of his skull. He fell twitching to the ground. Another vomited up his intestines, which wrapped themselves around his neck and strangled him. The bare hands of an immensely strong man tore open his chest and ripped out his own heart, as he watched in horror, unable to stop them.

Another soldier’s skin abandoned him. When the battle was over and our survivors crept back to the village, they found the skin crouching beside his flayed body. It leapt onto a village woman, trying to find a new host to cover. It took three men to pull it off. They had to throw it in a fire to stop its struggle.

When the soldiers realized what was happening, they wavered. Some began to run. But this was not a band of free-lance thugs, nor an army of conscripted farmers. Their commander ordered a charge against my father. He could kill only one at a time; and so he sank in a sea of swords. Still, the diversion had granted the village enough time that most of the women and children, and the less brave of the men, were able to escape into the forest. Among them, his pregnant wife—my mother.

I learned this story in fragments. None of the village adults would tell me anything about my father. Sometimes I extracted a piece from some child who knew something—usually by pinning them to the ground and threatening severe injury if they did not tell me what they knew. Each had heard only confused fragments of the story of that day, mainly about their own families’ part in it.

I was practically grown before I got most of the picture. That was one night when half the village grown-ups had snuck off into the forest, to sit in a clearing drinking millet-beer. I snuck after them and hid and listened.

Everyone had heard everything a thousand times; but they could not stop telling the stories, or lay the arguments to rest, not after a decade and more.

Our village was mostly Buddhists. Several insisted, annoyed that anyone could disagree, that the Buddhist First Precept is perfectly clear. You should not kill. Not animals, and especially not people. It is bad karma—the worst.

(No one pointed out the unpleasant obvious, that drinking millet-beer might itself be bad karma. There’s bad karma, and then there’s bad karma. Anyway, millet-beer isn’t really intoxicating. And besides, there was no one there except them, and they were sneaking, so it didn’t count.)

I had no doubt that my father was a hero—but that day he killed many men.

“Of course killing is wrong usually,” said the smith. He was the only one besides my father who had killed an enemy in that battle. “But everyone knows there are exceptions. Nobody could expect you not to fight back if someone’s about to put a sword through you.”

“There are no exceptions,” replied my foster-mother. “I asked the monks. They said ‘no exceptions.’ You didn’t believe me, so I asked them again, the next time they came here. And you heard them! No exceptions.”

“Anyway, it wasn’t just self-defense,” said the clothes-dyer. “You can’t ask men to stand by and do nothing while their wives and children are slaughtered!”

“There’s no eksheption for that, neither,” said my foster-mother. Her voice was slurring a little. She was a devout Buddhist, but she did like millet-beer.

“What I say is, not even those pig-sons deserved to die like they did.” That was the miller. “You were safely off in the forest. You can’t imagine it. I saw one of them grow a mouth on his belly, a mouth as big as his head. His own hands and feet went in there. It had eaten down to the elbows and knees before one of the other bastards cut off his head to end it.”

“No one deserves to die like my Chandra did, either!” said the baker’s wife. Her late husband had taken two sword-blows. One left him with half a face; the other spilled his guts. He was left for dead by the enemy, but he was a strong man, and was three nights dying after that.

“Some say killing is always wrong, and some say not,” said the village headman, shaking his head. He was a Brahmin—a Hindu priest—not a Buddhist. “What everyone knows is that sorcery, consorting with demons, is evil. It doesn’t matter what he did or why. It doesn’t matter what happened. It’s an abomination. I say having that man in our village is what brought the enemy on us in the first place. He offended the gods, and they sent a just punishment.”

“It’s not right, creepy men like that bringing disaster on decent people,” said my foster-mother. She and the Brahmin were natural allies in their piety, despite worshipping different gods. “And his brother’s another one like that.” She meant my uncle.

“Maybe he is a Tantrika,” said the smith. “But he pays you more than well enough to take care of the kid—enough to feed you and your own children as well. He gave you the boy because your husband died bravely, not for the sweetness of your tongue. But you could still speak better of him.”

“Hey, you sleeping with him? Giving him his money’s worth?” asked the barber.

“No!” said my foster-mother.

“I sure wouldn’t mind,” said the rope-maker, to general laughter. She had a reputation, and she didn’t care who knew it. She wasn’t the only one with eyes for my uncle, though.

“He pays none too much,” my foster-mother said. “That boy is a dakini-child. He’s nothing but trouble, and he’ll come to a bad end. If he doesn’t take after his father, he takesh after his mother. His soul is as black as her skin. He’ll bring another cursh on this village, you wait and see.”

Oh, hell. I’ve gotten lost in time again. Here I am telling you about my foster-mother, and my own mother hasn’t even been murdered yet.

My essay “Buddhists who kill” discusses the Buddhist ethics of murder and war.