Dakinis were fearsome witches who ate human flesh. They were also the enlightened goddesses who made tantric Buddhism available to humankind. 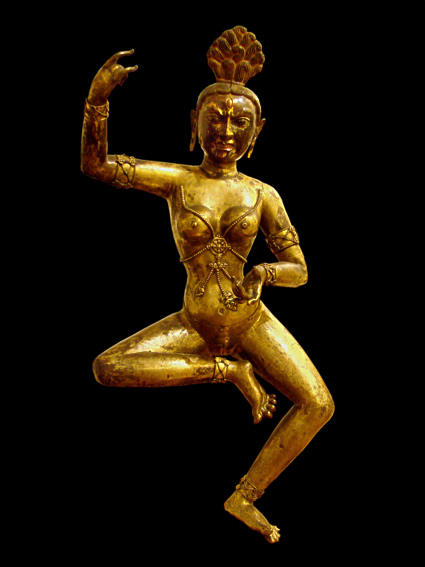 “Where did Buddhist Tantra come from?” is a question that fascinates me. Understanding the origins of a cultural system often helps make sense what it has become, even after centuries of transformation.

According to some scriptures, tantra was given to Buddhists by dakinis. That is a strangely ambiguous word. Dakinis may be supernatural or human. They can be terrifying or alluring; malignant or helpful; Buddhist or not. The one thing that is clear is that they are female. “Witch” is probably the best translation, since it covers many of the same ambiguities. “Dakini” is now often used vaguely to refer to any female spirit, and also to any female tantrika.

Western scholars have a guess about the original dakinis, based on early tantric texts, history, and anthropology. (See for instance Kiss of the Yogini and The Origins of Yoga and Tantra.)

Historians’ guesses, right or wrong, are irrelevant to the religious significance of dakinis. History cannot tell us “what dakinis really are.” The reality of dakinis, for any particular tantric system, is defined by their function within that system.

However, I have loosely based the fictional dakinis in The Vetali’s Gift on the historical theory, because I find parts of it emotionally compelling.

According to this theory, the dakinis were shamanic priestesses of a non-Buddhist, non-Hindu “tribal” people of Bengal (the region just east of Magadha, where Surya was born). They belonged to an ethnic group—perhaps Munda—with darker skin than the Buddhists and Hindus of the time.

The dakinis practiced sex magic (“karma mudra”) and death magic. These gave them the power of flight (among other abilities). Flying is a common result of shamanic practices everywhere (and of course European witches fly, too). Dakinis are closely associated with birds, and often appear as bird-headed women.

The ambiguous divine/human nature of the dakinis may come from a practice of shamanic spirit possession. In Voodoo, for example, a god can “ride” (take over) the body of a shaman. It is possible that tantric Buddhist self-arising yidam practice—in which one replaces one’s ordinary mind with the mind of a specific non-physical Buddha, through ritual and visualization—originated with the dakinis’ method of spirit possession.

Dakinis allowed a few Buddhists and Hindus into their rituals. Why is not clear. The tribes seem to have had strict rules against allowing outsider participation. Their social structure was based on kulas, or “clans,” and only members of a clan could attend. This might be because the tribes were endogamous—allowing sex only between members of the same clan—and group sex was part of the practice. The dakinis seem to have adopted some Buddhists and Hindus into their kinship structure, as clan members, which legitimized their involvement in karma mudra rituals.

According to this theory, these cultural hybrids—practitioners of both Buddhism and the dakini rites—created Inner Tantra by importing some dakini practices into Buddhism, modifying them to better fit with then-current Buddhist theory. Outer Tantra had recently evolved from Mahayana, and was more compatible with dakini magic than were previous forms of Buddhism.

The Inner Tantras often include sections on the sign language used to communicate with the dakinis. Usually this is explained by the need for secrecy; it gave a way for (male) tantrikas to communicate with (female) dakinis in public without anyone else understanding. That may be, but I suspect the original reason was that the languages they spoke were very different. The sign language mainly allowed tantrikas to communicate that they were (adopted) members of a kula, and for dakinis to explain when and where there would be a ritual. The signs were called mudras—“symbols” or “gestures”—and influenced the elaborate evocative hand-dances of modern tantric ritual.

Tantras often describe the dakinis as terrifying and dangerous. (In fact, in modern village India, “dakini” still means “witch,” in the sense of “malevolent woman who uses magic to harm people.”) They are described as cannibals and “executioners” in the tantras, and were supposed to haunt charnel grounds. Probably they did practice some sort of death-magic, perhaps involving human sacrifice. It is also plausible that they reacted violently to their rites being interrupted by outsiders. (“Liberation” is tantric code for killing, so the “Great Liberation” of “I go to the dakinis” is ritual murder or human sacrifice.)

I can’t help thinking, however, that the ferocity of the dakinis might have been exaggerated. Both the dakinis and the early tantrikas would have motivations to do so.

The first outsiders adopted by the dakinis probably felt they were onto a good thing. They didn’t want it messed up by throngs of newcomers. Portraying the dakinis as extremely dangerous would keep others away. It would also enhance the reputation of the tantrikas themselves as powerful, dangerous men, with access to valuable knowledge not otherwise obtainable.

Quite possibly the dakinis found that rumors of their rituals brought men who were mainly attracted by the prospect of easy women. Getting the word out that sex tourists were likely to be slaughtered and eaten would be a useful deterrent.