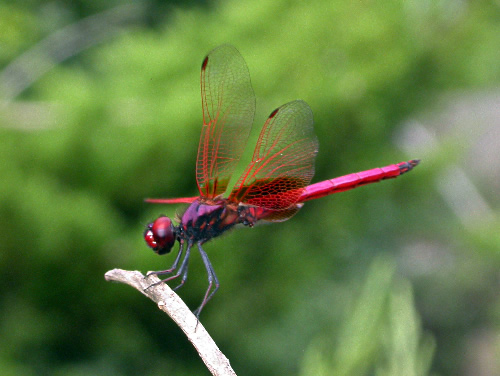 Sukhi stretched her legs out so her toes dangled in the river water.

“Why were you not moving when I saw you?” I asked. I wanted her nose to wiggle again.

“It’s why I come to the river,” she said. “That and the dragonflies.”

“I thought you came to the river to escape your mother,” I said.

“Before I learned the river magic, when I hid from my mother, I could always still hear her nagging at me. In my head.”

I understood. Me too; no matter where I went, there was the horror of my mother’s death, the rage at my intolerable foster-mother, and the hopeless trap of my future.

“The river can carry her away.”

“It’s what you saw,” she said. “Hold perfectly still. Look at the river.” She pointed. “Don’t let your eyes move. If you hear voices in your head, listen to the river instead.”

“That’s weird,” I said. But I wanted her to like me. So I turned to the river and looked.

There were reeds, in a shallow, a few paces in front of us. I had skirted them when I crossed the river. The reeds bent and swayed as the water rushed past.

A fish jumped. I could barely hear its splash above the constant gurgling sound. That reminded me she said listening would stop my foster-mother’s voice. But now I heard my foster-mother telling me that Lord Buddha hated idleness.

“It doesn’t work,” I said. “I wasn’t thinking about my foster-mother until I tried to listen to the river, and that reminded me.”

She laughed. “You have to try for more than a minute! You have to wait. Half an hour, maybe. You have to stay perfectly still, and let her go. You have to let the river wash her away.”

I frowned; but she seemed to expect me to try again. I turned back again to the river.

The sun flickered on the surface, bright snaking loops of light.

The water tugged my eyes downstream. I jerked them back, and a moment later they were sailing off again.

This is stupid, I thought. If she can do this, so can I. I’m not going to look weak in front of a girl.

I gritted my teeth, determined to control my eyes. For a moment, now and then, I could get them to stop; but then I would remember that this was supposed to be magic, and I would think of my mother, or my uncle, and I would lose it. My foot hurt, and then my back, and I kept moving them about before remembering she said to sit perfectly still. How could she do that? I listened to the river, trying to put it in place of my foster-brother’s whine, and realized I was looking at the trees on the far bank instead of the water.

I was not going to give up. Even if I had to cheat. If I could just hold still, how would she know what my eyes and ears were doing?

Just hold still… And then, the river’s voice rose to a roar, the flashing sun went blinding, and I was lost. There was no me, no family, no past or future, nothing outside the pounding appalling vastness of now, nothing to hold on to—

There was Sukhi. I remembered her with a start. I tore my eyes away from the river and shook my head hard, clearing it.

“What about the dragonflies?” I asked.

“Just look,” she said. She pointed to one landing in the reeds.

It looked like every other dragonfly. It was red and shiny. And its head was horrifying, looked at closely. I was not going to stare at it for half an hour. Anyway, it buzzed off after a moment or two.

“Dragonflies are like memories,” she said. “They zoom in from nowhere. They land and quiver. And then they take off and disappear without a trace.”

“My memories stick around for hours sometimes,” I said.

“If you watch closely, you’ll see they don’t,” she said.

I couldn’t make much sense of it. But her magic was meant to stop the hopeless anger, and I realized I didn’t need it. I had barely felt it since I’d started talking to her. Maybe it was Sukhi that was magic, not her river or dragonflies.

She reached into the basket beside her and lifted out something no longer than her little finger. She placed it flat on her palm. “Look what I made,” she said.

It was a surprising likeness of a dragonfly. I bent close to see better. She had wrapped bright red thread around a twig to form the body. A single loop of black thread marked each joint in its tail. Dried black stalks, crimped in their centers, were legs. She had knotted tiny loops of red thread to form the wings, and then dipped them in hide glue. The translucent glue had dried to look like the dragonfly’s invisible membrane.

“The eyes—” I said. They were two broken shards of red glass. They were the least believable part; and I instantly regretted mentioning them.

“I found them,” she said. “Aren’t they beautiful?”

I stared at them, glittering in her tiny hand. The sun, reflecting from the whiteness of her soft palm, lit the glass eyes from beneath. For a long moment, I was drawn into their ruby depths; and then I saw the harsh white of the sun glinting from their sharp edges. A sudden image flashed of the splinters slicing into her skin, blood welling up along the line of the tear, and I felt shocking sympathetic pain in my own palm. I pulled back with a gasp and looked into her face.

“Quite ordinary,” I had thought when I first saw her. “Funny-looking,” I thought when her nose first wiggled like a rabbit’s.

Why didn’t I notice?

Isn’t it odd that we use the same word, “beautiful,” for a sliver of glass and for a woman’s face? No jewel, no painting, no rose or mountain or ocean has one hundredth the beauty of a pretty girl. These are not the same thing. And yet we find faults even in the face of a famous courtesan; and who ever found fault with the beauty of a rose?

Was she really as beautiful as I remember her? I can see her clearly now… But memory plays tricks. You’ll find that too, when you are older. Even if you don’t come unstuck in time, as I did.

I was staring at her funny nose, thinking about the way it quivered as she talked, pulled by her upper lip. I had stopped breathing.

I reached out and touched my finger into that groove that lies in the middle of the upper lip. It fit perfectly. The cavity was so soft. She held utterly still. My heart pounded, making my finger tremble invisibly, so I could feel the springy warmth of her lip cradling my fingertip.

For an age I stared into her eyes, without thinking, without moving.

Then I had to breathe again.

She turned away and put the dragonfly back in the basket. “I have to go,” she said. “My mother will kill me.”

I looked around, startled, angry, to see if there was one lurking in a bush somewhere about.

She laughed. I didn’t understand why.

“Sukhi, you have to marry me,” I said. “Then I can take you away from your mother, and we can live how we want.”

“Oh, Surya,” she said. “Don’t be silly. It is forbidden for an outcaste even to let their shadow to cross the path of a brahmin. If my father knew you touched me, he really would kill me. And you.”

“He’d find us there. Anyway, how would we live? You are not old enough—”

My mind was racing; there had to be a solution. “We can go to the city, and live with my uncle,” I said.

“Would your uncle say yes to that? Why aren’t you living with him now?” she asked. She looked angry.

I didn’t know the answer, actually. I saw my uncle only once a year. Why had he abandoned me?

“I expect so. I will ask him when he next comes to visit,” I said. “But you have to ask your parents, too. There has to be a way.”

“It’s impossible, Surya,” she said. “ “A brahmin does what the gods want, not what the brahmin wants.’ And the daughter of a brahmin… the gods hate us.”

She turned to go.

“Sukhi—when will I see you again?”

That week, everything was Sukhi. When I was weeding, a mustard flower was Sukhi smiling. My eyes saw the flower, but I saw Sukhi. My foster-mother’s old goat was Sukhi frowning. A crow’s caw was Sukhi’s hard laugh, and a thrush’s song her giggle.

I thought constantly about the feel of my finger in the groove on her lip.

“Indeed,” said the old man. “The western barbarians call it the ‘philtrum,’ which means ‘love potion’ in their language. Did you also know that?”

“No,” admitted the young monk.

I stroked my own philtrum, feeling the softness of it, how it felt to be touched. I wondered what she felt as I touched her.

Sukhi’s forgetting-magic stayed with me. Nothing meant anything except her. I didn’t think about my mother and didn’t care about my foster-family. I paid no attention and picked no fights. My younger foster-brother tried harder than ever to annoy me, and I ignored him.

“What’s wrong with him?” he asked at dinner.

That pulled me out of a daydream. “I’m getting married,” I announced.

“You can’t!” said my foster-mother. She looked angry; but also frightened.

Her furious warning look cut him off; but it was too late.

Now at last I understood her scheme. In two or three years, I would be strong enough to work my father’s field. Then my uncle’s payments to her would stop. If I became a monk, the field would fall to her family by default. Her older son was already working it, doubling their income.

I would need that field to support Sukhi. If I could. Somehow.

“I will marry Sukhi,” I said. “I will not become a monk—and I am keeping my father’s field. You have no right.”

A week later, I was at the river bank as soon after dawn as I could reach it.

I waited all day, full of plans and dreams, imaginings joyful and awful.

It was late afternoon when she arrived. She carried the little basket.

Most of her hair had been cut off. Jagged tufts stuck out at odd angles. She had black blotches under her eyes. Her arms, her legs, her whole body was yellow and gray and green, week-old bruises in patches and rough parallel lines. Here and there were long black scabs where her father’s cane had broken her skin.

She shook her head hard, scowling. She opened the basket and took out the toy dragonfly. She held it out to me. I hesitated, then took it.

She put her finger on my lip, and I stopped. She stood on her toes and kissed me.

Then she turned and walked away; hard, determined steps.

“Have you ever been in love?” asked the old man, after a long silence.

“Well… I have great reverence for my teacher,” said the young monk.

“Yes, I love him too… probably not in quite the same way,” said the old man. “But guru-devotion is also not the same as being in love. It has something in common, but I meant ‘in love,’ like—”

“Yes. Well. Perhaps no more need be said. For now.”