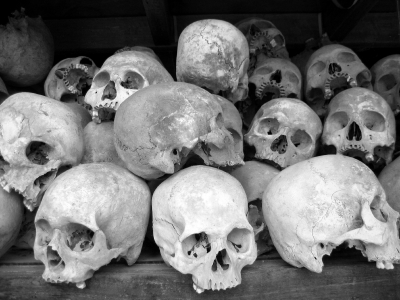 On the throne there was a girl, about my age. As I approached, she stepped down and came to greet me. “This is the vetali,” I thought.

My eyes opened. It was day. I was lying in the charnel ground, with a ferocious headache.

There was a ribcage an arm’s length from my nose.

The bonds that tied my limbs were gone. I sat up.

The clearing was less frightening in daylight, but more alien. The scattered body parts seemed incomprehensible, meaningless. It was quiet apart from the buzzing of flies.

My mother’s kartika-charm was gone. The dakinis must have taken it.

It took me weeks to reach the River of the Black Mother. I walked north. I was sure of the way, although I had never been far from my village.

I traded field work for food. There was not much of that. Tax collectors took most of it. People were fearful. Distant wars were growing less distant. So went the rumors, along with grim stories of sorcery, disease and death.

I spent a night in a village on the River at the foot of the mountains. In the morning I started up the river-valley.

Growing up on the flat, I had never seen a hill or large rock. I found the way difficult as the land grew rough and steep. There was only a faint path beside the water; but I was nearing my destination.

The shape of the valley matched my vision, but nothing else did.

Something was wrong. No verdant sward and flowering fruiting trees; the valley sides were bare apart from dead, twisted scrub. Birds there were, but not the bright songsters of my vision. Only vultures wheeled and wobbled, far above.

The valley narrowed to a gorge and turned to the right. Rounding the corner, I could see the place the palace should be, perched high on the right bank.

It was not there.

Nor was the bridge.

Fording the frigid stream, I fell. Soaked and scraped but undrowned.

I saw a cave-mouth on the side of the mountain where the palace had been. A way, steep as a ladder, led up.

I was torn. This was certainly the valley of my vision, though nothing fit. But what purpose would the dangerous climb to a cave serve? I was shaking with cold, and my fall frightened me.

But if there was a path to the cave, there must be someone who used the path. The path-maker could answer questions, at least. Perhaps this cave-dweller was a caretaker on the way to the palace, or the guardian of a magic entrance to it.

As I made my way up the cliff, I distracted myself from fear by rehearsing my grand speech. I would announce my Quest, in the elegant language suitable for a hero. I would order the caretaker to take me to the vetali.

The way came out on a wide rocky ledge. Nothing grew there, but I had to pick my way carefully through a mass of coiling thorn bushes, their stems black and brittle, leafless and long-dead.

A pair of carved wooden doors leaned against the cliff-face by the cave mouth. It seemed that they had once closed the opening, but now were crumbling with dry-rot.

The entrance was dark and narrow. The sun was setting. It had taken me the whole day to walk from the village.

Two vultures perched by the gloomy hole. They eyed me curiously.

I glared at them. I was a hero, I reminded myself, on a Quest.

I strode confidently into the cave.

My foot twisted on something hard. I stumbled; nearly caught myself on the other leg; and landed on a palm and knee, skinning both.

I did not fall on my face.

I looked back, my eyes starting to adjust to the light, and saw that the offending impediment was a human skull, lying by the doorway.

“You took your time,” came a voice.

“What?” I asked. The noble speech had gone entirely out of my mind.

“You are late,” said the voice. “We haven’t got much time. Probably not enough.”

I looked around, wishing my knee didn’t hurt so much.

The voice came from a very large, extraordinarily ugly, and entirely naked woman.

She was sitting on a stool made from human bones. Her face was lit by a single oil lamp.

“Um,” I said, trying to remember what I had meant to say. “Take me to the vetali!”

“I can show you the vetali,” she said. “But why do you come looking for her?”

“I seek the Secret of Life and Death!”

“You think you know the Secret of Life and Death?” I asked.

“Life! Ha! What you call life… eating and shitting and fucking; that’s life. There’s no mystery in that.”

There was considerable mystery—for me, at least—about what she called fucking; but I did not want to say so.

“That is not all there is to life!”

“There are higher things. There is the Way of Lord Buddha.”

I had thought everyone knew that, before my journey. But I had come through villages without Buddhists.

“He is the god we worship, in my village,” I replied.

“And why worship this ‘Buddha’?”

“He is the true god! And he is our protector.”

“So… he protects your family… they are all well, I hope?”

“They are dead,” I admitted.

“That is a poor sort of protector. You worship a puny god, it seems.”

I was annoyed. And her impiety was not likely to go unpunished. “Lord Buddha teaches the True Dharma, the Law of Karma.”

She was obviously feeble-minded. Even where there were no Buddhists—“Everyone knows the Law of Karma! If you think bad thoughts, the minions of Lord Yama drag you down to hell to burn in flames for eons.”

“He dooms you to hell if you think bad thoughts?” she asked. “This is another of your gods?”

“That is an evil god, then. You should kill him.”

She was insane. “What gods do you worship, then?” I asked.

“I worship no gods,” she replied. “I rest my mind in primordial purity.” Seeing my scowl, she added “You may call that Samantabhadri, if you like.”

Her expression said she thought she was being generous.

I had had enough of this gibberish. “I have not come to argue with a madwoman,” I said.

I gathered what dignity I could; her prattling had left my mind in disarray.

“I am on a Quest, for the benefit of all sentient beings. It is imperative that you take me to the vetali, at once.”

“And what gift have you brought for the vetali?” she asked.

“Everyone brings the vetali a gift.”

This was unexpected. There had been nothing about a gift, in the vision.

“I… I have nothing,” I admitted. “I only ever had the kartika charm of my mother; and the dakinis took that.”

She stood and looked at me closely. Her expression was like my foster-mother’s, opening a two-day-old pot of dal that had grown maggots.

“I suppose you’ll have to do,” she said. “I am going hunting. You can sleep on the cot there.”

She swept out of the cave, before I could say anything, into the night, now completely black.

I strode out onto the ledge, but she was already out of sight in the dark.

I stood a while in indecision. Making my way back down to the river without light seemed near-suicidal; and what would I do then?

I explored the cave carefully.

There was a back room, separated from the front by a hanging skin. I had the idea that it might lead to a tunnel or magic door that would take me to the vetali’s palace, but I could not find anything of the sort. The back room held little besides a cot, made of skins on a frame of human bones.

The front room had a hearth with a pot, the stool, another bed, a scattering of bones on the floor, and some odd tools on the wall. One was a kartika, like the dakinis’: a butcher’s flensing knife.

She was some sort of ghoul or ogress. Sleeping in her cave was an obviously bad idea. On the other hand, she said she could take me to the vetali, and she had not attacked me when she could have. And she was only a woman. She had not mentioned anyone else living in the cave—though there were two beds.

In the end I decided I had no choice. I curled up on the cot in the outside room, telling myself to sleep only lightly, so I could leap up in case of danger.