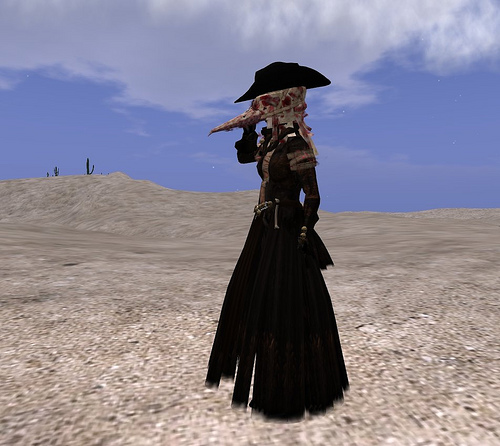 She was some sort of ghoul or ogress. Sleeping in her cave was an obviously bad idea…

I woke the next morning with daylight streaming in through the cave mouth. Pulling aside the skin that hid the cave’s back room, I saw that the ogress had returned while I slept, and now lay on her bed of bones.

She knew the way to the vetali’s palace, and I needed to argue her into cooperation.

I coughed loudly to wake her, with no result. I clapped my hands and called out “Hello!”, but she seemed to be dead to the world. Evidently she had been out the whole night on some loathsome errand.

I was still quite sure that the palace must be somewhere nearby. I spent the day exploring the area, up and down the valley and hillsides.

My knee hurt. I limped back to the cave at dusk. Getting the ogress to tell me where to find the palace seemed the only way forward.

I had not eaten since the morning before, so I was now quite hungry, and not in a mood for nonsense. If I could not find the palace the next day, I would have to go back to the village at the foot of the mountains to get food.

She was waiting for me on the cliff-ledge at the cave mouth. “Come down to the river with me,” she said.

“Because I said so,” she said.

“Why should—” I began, but she was already heading down, faster than I could go. I followed her reluctantly.

When I reached the bottom, she was standing by the river, gazing downstream. I could see nothing.

“What…” I began, and then decided not to bother.

She stood completely motionless, apparently waiting for something.

Peering into the gloom, I saw a dark mass in the water downstream. It was floating toward us. Its motion was smooth and constant, ignoring the twists and eddies of the fast-moving stream.

I realized that since it was floating upstream, it could not be floating at all, but moving under its own power. It must be an animal of some kind—a crocodile, perhaps. It could be dangerous; I stepped back from the stream bank.

“There are no crocodiles in the Himalayas,” said the young monk.

“But I didn’t know everything, when I was your age,” said the old man.

The thing floated up to the bank by the ogress and stopped. She kneeled down, and before I could give a warning, reached out and turned it over.

It was a human corpse that had been floating face-down.

She stroked its face.

“He has sent me a final gift,” she said.

She took a knife from her belt and cut a strip of flesh from the thing’s thigh. “Eat,” she said, handing it to me.

I am a Buddhist, not a cannibal!, I thought. But—

I realized that I had reached my first Test, on the Quest of Life and Death. Death… I had thought I wanted to know about death…

“Do you want to see the vetali?” she asked.

It was a Test. The fate of my Quest hung in the balance. Should I threaten to kill this woman, to compel her to take me to the vetali? Or was she somehow the vetali’s faithful servant, and I should pretend to be nice to her to get her to cooperate? She was plainly evil… but I remembered that my own mother had eaten human flesh.

“Are you a dakini?” I asked. She looked nothing like my mother, or like the dakinis I found in the charnel ground.

She laughed. “Some will say so.”

In the stories, when the hero comes to a Test, he doesn’t stand around wondering what to do. He just does the right thing, heedless of danger. The question is not what he should do, but whether he can do it.

This was the wrong type of Test. I had no idea what I was supposed to do.

I remembered again that I was a Buddhist. I should pray. Maybe a goddess would appear and instruct me.

I wasn’t sure I remembered the mantra. Om Tutti Tutti Tara Tara Tara.

That wasn’t right, either.

The ogress waited, holding out the dead flesh.

My hand stopped just before my mouth. I couldn’t help looking at the thing. It was horrible.

I closed my eyes and forced it into my mouth.

I bit into it once and then swallowed it whole.

It caught in my throat. I choked, and then it came back up. Watery yellow vomit followed. I needed to empty my stomach, but there was nothing much in there.

I fell to my knees and hunched over. I was dizzy with hunger and shock.

I was crying as well as retching.

When I had finished vomiting, the ogress helped me up.

She turned back to the body on the stream bank. She touched her hand to her forehead, her throat, and her chest. She knelt and touched the corpse in the same places.

Then she scooped it out of the water with one arm. She swung it onto her hip like a baby, limp legs dangling uselessly beside hers.

“Come along,” she said, and started up the path.

I followed, trying to keep up, while she climbed the steep bank as if the body weighed nothing.