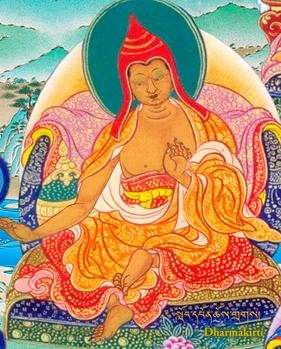 “You should be grateful,” the ogress said. “Hardly anyone gets to eat an entire epistemologist.”

“An epis-what?” I asked. Then I realized, too late, that she was side-tracking me.

“An epistemologist. He wanted to know how you can know things.”

“Well… How do you know that the Buddha was enlightened?”

“Are you saying the Buddha wasn’t enlightened? Because everyone knows that—even Brahmins say so.”

“Maybe I chose a bad example… Although he spent years working on that one… Do you know whether you are in a dream now?”

“Have you ever had a dream in which you knew you were dreaming?”

I thought of the nightmare I had had in the charnel ground, after the dakinis forced me to drink something horrible. An encircling army of the dead, and I couldn’t wake up.

“And you have had dreams in which you didn’t know you were dreaming.”

“So are you dreaming now?”

“Because this is real. Nothing strange is happening, like in a dream.”

The ogress looked at the half-eaten corpse. It now seemed to be the body of a thirty-something year old.

I pressed my lips closed. That was weird… and I was not dreaming.

She sighed. “You know the earth is flat, right?”

“Well, everyone knows that.”

“Which everyone? Who is someone who knows that?”

“Is everything she believes true?”

“So she could be wrong.”

“Yes, but everyone knows the earth is flat.”

“In the country of the Yavanas, everyone says the earth is round, like a ball.”

“If you had been born in the country of the Yavanas, everyone you knew would agree that the earth is a sphere.”

“That wouldn’t make it true!”

“Just so. So he said that you can’t rely on what everyone says. Just because everyone agrees, doesn’t make it so.”

“But anyone can see that the earth is flat!”

“Around the village you were born in, the earth is flat. But here, it is not.”

I knew the answer to that one. “The earth is inconceivably large. Mountains are tiny bumps on it, like the fingerprints left by a potter on a flat plate.”

She picked up the nearest handy object. “If seeing is knowing, what is this?”

“Are you sure? Here, take a good look.” She tossed me the bone.

“It might not be. I might be a witch who put a spell on you, so you see it as a finger bone, but actually it is a poisonous centipede.”

I flinched. I knew from my uncle’s stories that there were witches who could create such illusions. But, “It’s been lying there for days. You couldn’t fool me for that long. Anyway, I can feel it is finger bone, not a centipede.”

“Still, sometimes your senses can deceive you. If you stare at the blue sky, what do you see?”

“A blue sky.” This stupid conversation was going nowhere. I hated being stuck in a cave with a stupid ogress and a broken ankle.

“You see blue, and if you keep staring you see grey wriggling worms that slide across the sky. But you know they aren’t really there.”

I had seen that, and had wondered why.

“Yeah? What does a Buddha see, then?”

“He said that a Buddha might see that bone as a precious jewel.”

“He said that a Buddha might see this cave as a palace, and me as a beautiful girl.”

I had had far more than enough of this game. She was making the dead guy out to be someone special, but it was obvious from the corpse—or what was left of it—that he was perfectly ordinary. Except for aging backwards.

“Yeah, so how could he possibly know what a Buddha sees?”

She looked at me with an enormous grin. “That is the first half-way intelligent thing I have ever heard you say.”

That made me feel odd. While I was trying to come up with a reply, she said, “He wrote poems for me, you know.”

“Poems?” I asked, involuntarily. Immediately I regretted it. Again she had tricked me into letting her change the subject. It was impossible to force her to talk sense, or stick to a topic.

The grammar books all say that ‘mind’ is neuter,

And so I thought it safe to let my mind

But now it lingers in embraces tender:

For Panini made a mistake, I find,

“He was frightfully clever,” she said.

It went right over my head. I had barely heard of “grammar” and had no idea who Panini was. She is taunting me, I thought.

As I was trying to find a cutting response, she interrupted: “Would you like another one?”

Ignoring my non-answer, she recited:

A hundred times I learnt from my philosophy

To think no more of love, this vanity,

This dream, this source of all regret,

But no philosophy can make my heart forget

“What? Whose loveliness?” I asked. I was lost. This poem made hardly any more sense than the last one.

She was delusional. I didn’t care if he was a monk—nobody could possibly have thought she was lovely.

“And I was younger then,” she added.

“Make love to him? No! He was too caught up in trying to be the perfect monk, in those days. It’s a pity. He had a stick up his butt, all-round. It hurt his philosophy… If he hadn’t been trying so hard to be a saint, I could have loosened him up a bit.”

“I suppose you think I need to be loosened up a bit?”

“Hoping I’ll make love to you?”

I was appalled at the possibility.

“No, I don’t think you need loosening up,” she said. “What you need is quite different. You need to be tamed.”

“Yes. You are so full of pain and rage and resentment, it makes you stupid and mean.”

I felt the familiar flare of anger. “I don’t want to be tamed!”

“Oh, well, go on being angry all the time, then, if you like that better.”

“I don’t like it! But how can I help it, if everybody dies, and you force me to eat a corpse!”

“You could be grateful. If he hadn’t sent me his body, you might not have anything to eat at all.”

“That’s stupid. How could I be grateful to him? He’s dead. It wouldn’t do him any good.”

“Gratitude isn’t for the person you are grateful to. Gratitude is for you.”

I thought of Sukhi. It was the sort of thing she would say, when I was hating everyone. It was only when I was with Sukhi that I could stop being angry.

“You could say a few words of gratitude every time you eat him,” the ogress said.

“It doesn’t matter. Anything, so long as you mean it.”

I decided to play along with this lunacy.

Dear Dharmakirti, um. Thank you for sending me your dead body. I mean, thank you for sending her your body. I am eating it. It is all there is, so I am grateful you did. It’s not really all that bad. I hope you are having a good rebirth. Sincerely, Suryapavan.

I waited for her to laugh at me. I certainly felt like an idiot, and regretted my spur-of-the-moment complaisance. But I also felt a strange sensation of lightness.