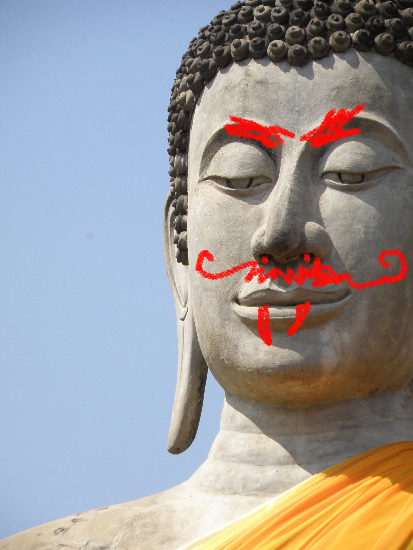 The picture above is an illustration from a chapter of my Buddhist novel, titled “Lord Buddha.” Apparently, some people who think they are Buddhists want to find it offensive.

In fact, some have explained in detail how they will torture, rape, mutilate, and murder me1 if I don’t take it down. This is quite interesting. I wonder where it is coming from?

The comment thread on that page is somewhat hostile and abusive. I deleted many far more graphic comments because they might be upsetting to some readers. You can get the general idea from what’s there, though.

American Buddhists may find this surprising, because they think non-violence and benevolence are central principles of Buddhism. Threatening torture and death might not seem… very… Buddhist.

That is a bit naive, though. As I’ve written on this site, Mahayana and Vajrayana Buddhism contain ethical justifications for killing people under some circumstances. The main case is when many innocent lives can be saved by killing a violent wrong-doer. Historically, this doctrine has been sometimes twisted to justify wars and genocides in the name of “defending Buddhism from heresy.” This is a dire distortion, but hardly surprising given human hypocrisy.

So it might seem that the people threatening to kill me are on solid ground, in terms of historical tradition.

However, as far as I know, there is no tradition within Buddhism that condemns “offensive” depictions of the Buddha. (If there is one, please tell me about it!) Getting angry about this is probably a recent innovation. Where did this idea come from, and what is its function?

Recently, I’ve been thinking a lot, for my Meaningness site, about fundamentalism, about the contemporary atomization of meaning, and about how these two interact. I plan to write about that at length there. Here, I apply the ideas I’m developing to the objections to the image above.

Fundamentalist Buddhism, based on Islamism

Fundamentalist Buddhism has developed only recently, mainly in Sri Lanka and Burma. It’s obvious that English is not the first language of the people threatening to kill me; they are Asian natives.

Fundamentalisms claim to oppose modernity, but actually are totally modern themselves. They are expressions of the “systematic mode of meaningness,” in the language of the Meaningness book. That is, they try to base all meaning, via a network of justifications, on some primal Truth. This is a modern, Western idea; it is unknown in genuine traditions. In genuine traditions, authority rests in institutional continuity, not justifications. Fundamentalisms are radical new movements that claim special insight that obsoletes the “corrupt” institutional opinions—which makes them the antithesis of tradition.

Genuine traditions have no defense against modernity. Modernity asks “why would you believe that?” and tradition has no answer (besides, perhaps, “we always have”). Modernity’s innovation was to construct systems of justification that answer all questions of meaning. Fundamentalisms try to rebuild their traditions into systems—in imitation of modernity.

What fundamentalisms actually oppose is not modernity, but post-modernity. In the West, all systems of meaning disintegrated during the 20th century. We live in a shattered world; we navigate among fragments of meaning, chunks and splinters of numerous broken systems, all mixed up together. This creates many problems, which we are adapting to reasonably well.

The West can adapt to the breakdown of systems of meaning because we had well-functioning systems for a couple centuries, and spent the 20th century figuring out why they can’t work anymore.

Much of the rest of the world has never had a working systematic mode, and doesn’t understand why that can’t work. As in the West in the 1930s, the obvious response is to try to make systems work by force. Fundamentalism and totalitarian nationalism are versions of this.

Islamic, Hindu, and Buddhist fundamentalisms are strikingly similar to each other, presumably because they are all using the same tools to accomplish the same goals. It appears that they borrow ideas from each other, when they see something that works. Buddhist fundamentalism is the newest, and probably has taken a lot from Islamism—because that has been relatively successful.

I know of no other cases in which Buddhists have issued death threats for disrespectful depictions of the Buddha. However, this is a famous tactic of Islamic fundamentalists, notably in the cases of Salman Rushdie and the Muhammad cartoons controversy. These have led to actual killings, for instance in the Charlie Hebdo massacre.2 In the Islamic case, this has some doctrinal basis in aniconism, although that is apparently much overstated by fundamentalists. There’s no analogous traditional teaching in Buddhism so far as I know.

So, my guess is that Buddhist fundamentalists have borrowed this idea from Islamic ones. And, offhand, I suspect it might be 969 Buddhists, on the principle that movements come to resemble whatever they go to war against.

969 is a powerful Burmese fundamentalist nationalist Buddhist movement. Opposition to Islamic expansionism is its central aim. As a Buddhist, and as a Westerner concerned about Islamic expansionism globally, I’m sympathetic to that. Unfortunately, 969’s methods are rather similar to those of Islamic fundamentalism. If you are focussed on a particular enemy, you study their moves, and adopt ones that work.

The atomization of politics

I believe that, starting around 2000, we live in an atomized mode of meaningness. (I haven’t written this up yet, but you can get some sense of what that means here and from this chart.) Systems of meaning have not merely broken up into chunks, but shattered into tiny sifting shards, which recombine indiscriminately, kaleidoscopically, globally.

Nothing relates to anything else; there is no broad context or pattern. Nothing makes sense. This is the world of the internet, and social media, particularly.

In the atomized mode, politics makes no sense. Atomized politics consists of 140-character denunciation of supposed outrages. These propagate through Facebook Likes and Twitter retweets. Lacking context, they have to be as emotionally upsetting as possible, to make millions hit the retweet button without stopping to wonder “is this true? is it proportional? is it helpful?”

Politics has degenerated into retweetable shadow-plays that make no sense: Benghazi, Keystone, #Gamergate. No one can even say what these supposed controversies concern, yet everyone has to have an opinion. You demonstrate that you are a good person by having as strong an opinion as possible. You have to pretend to be utterly outraged by something that you know nothing about, and that has no relevance for your life.

Demonstrating pretended outrage requires yelling for blood louder than everyone else. Death threats are the minimal price of entry into serious online conversation.

The atomized mode is horrible, in many ways—although liberating in others. In the West, we can navigate it (with difficulty) because we have the history of successful systems collapsing gradually.

This is a luxury several billion people do not share. The internet is forcing them directly from the traditional mode into the atomized mode, with no understanding of the stages that came between. Westerners realize, reluctantly and implicitly, that atomization is necessary, and understand how to work with it. Afghan pastoralists and Burmese peasants cannot possibly make any sense of it.

Fundamentalism is attractive as a response: a way to preserve a world that makes sense, against the firehose stream of jagged insanity spewed by the internet. Unfortunately, it doesn’t work; it can’t work.

Fundamentalism was a sane response when it originated in the 1970s, but it is now atomized itself. The things Islamic terrorists say and do make no sense, in any framework, traditional or modern, Islamic or Western. Most of them know internet culture better than they know Islam. Most American fundamentalists don’t know basic Christian doctrines, and would reject them if they did.3

Buddhist death threats make no sense. They are a “performative contradiction”: by the very act of issuing a death threat, you demonstrate that you are not a Buddhist.

And, the “offensive” illustration on this page makes no sense. It’s a product of atomization: a little sliver of traditional Asian Buddhism snapped off and mixed up with the Bildungsroman tradition, horror movies, the YA fantasy genre, autonomous American children’s culture, hybrid Western Romantic Buddhism, and who knows what all else. For the novel’s intended audience—sophisticated Westerners—I hope it rings impressionistic resonances of meaning. I cannot fully explain it myself in words; it’s too allusive, too multiplistic. It is, nevertheless, a devout work of Buddhist art—just as the blasphemous story of Citrasena is.

For some Asian Buddhists, apparently the image makes good sense—as a predictable anti-Buddhist outrage—when viewed through the lens of Islamic fundamentalism.

But that is the atomized, mixed-up, globalized mode we are living in.

I believe we can do better. I am working toward a fluid mode of meaning: collaborative, creative, improvised, intimate, disposable, beautiful, and spiritual. I hope that it offers a better alternative than both fundamentalist modernism and atomized post-modernism. I hope that it will provide solutions for Afghans and Burmese people, as well as Americans.