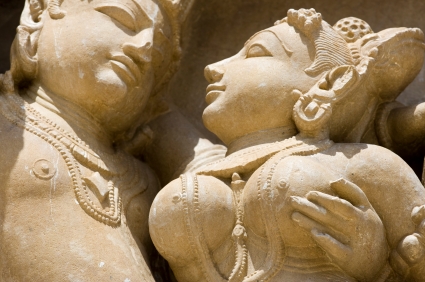 The Vetali’s Gift is a novel of Tantric Buddhism. It has some sex in it. Since there are many strong, confusing opinions about the role of sex in Tantra, I think I had better say something.

For more than a thousand years, most people have considered Tantra, and Buddhist sexual practice, too hot to handle. To try to neutralize their scary energy, both opponents and advocates of Tantra have deliberately confused the subject. Several opposing camps explain loudly and confidently what Tantra “really means,” and what that implies about “Tantric sex.” Each claims Tantra really means what would be convenient for them. No doubt they are all well-intentioned, but much of what they say is absurd.

I won’t explain what Tantra “really means,” because it has meant quite different things to different people in different places and times. Tantra, and the role of sex in Buddhism, are vast topics about which many books have been written. All I can do here is straighten out some basic confusions.

The Sutric response to Tantra

Tantric Buddhism is quite different from Sutra. Mahayoga’s fundamental principles and methods are actually incompatible with Sutra’s. Their ideas about what the world is like, and how you should behave, are directly opposite on many points. This apparent opposition has always been a problem. Ideally, Sutric and Tantric practitioners would respect each other’s different views and methods, and leave each other to get on with it. They rarely have done that.

For Sutra, desire is a primary cause of suffering, and must be eliminated. Sex is the biggest cause and expression of desire, so it should be avoided if at all possible. Being a monk is the best way to live, and celibacy is the most important point of the monastic code.

For Tantra, desire (especially sexual desire) is an “ornament of enlightenment.” It is delightful and a central method of the religious path. Tibetan Tantra considers sexual intercourse the only way of attaining Buddhahood.1

Advocates of Sutra have often tried to stamp out Tantra. When they could not succeed, they have tried instead to assimilate it. Their strategy is to neuter Tantra by reinterpreting it in Sutric terms. They say things like:

If you read the Tantras themselves, it is obvious that all this is nonsense. They are explicit and unambiguous about the central and necessary role of sexual practice in Tantra. Only by Herculean feats of deliberate misinterpretation can they be made to seem to say otherwise.

The denial of sexual practice is politically-motivated nonsense, too. It was, and is, propaganda of the socially conservative, monastic right wing of Buddhist power politics. It is part of a strategy of consolidating state power and suppressing populist movements.

The “clean-up” of Tantra has accelerated recently. Some Tibetan and Hindu gurus have developed modernized “export” Tantra, primarily for Western consumption. That suppresses all the scary parts of Tantra and turns it into “Sutra with extra singing and dancing.”

Personally, I find Mahayoga largely repellent, and I don’t practice much of it. I am sympathetic to those who wish it were different. I think rejecting some parts is probably a good idea, if that is done openly.

However, I find deliberate confusion unhelpful. To make an informed choice of practice, one needs to evaluate a system as it is. Otherwise, one might get drawn into practices that are a poor “fit,” based on false advertising. Or one might overlook useful practices because they have been made to sound unattractively holy. And if I were going to leave things out of Tantra, sex would not be on my list.

The Christian response to Tantra

Westerners first encountered Tantra in the 1800s. It seemed to be mostly about sex. The Westerners, who were Christians, thought that religion should mostly be about preventing sex, so they did not approve.

Many of the [Tantras] contain directions respecting a most shocking mode of worship. These [Tantras] direct that the person must, in the night, choose a woman as the object of worship. Here things too abominable to enter the ears of man, and impossible to be revealed to a Christian public, are contained. The priest behaves toward this female in a manner which decency forbids to be mentioned.
—Excerpts from William Ward, writing in 1817, quoted in Geoffrey Samuel’s The Origins of Yoga and Tantra

This is charmingly idiotic. However, Western Buddhists have grown up in a Christian culture, and it is difficult to completely abandon Christian values. Most are instinctively doubtful of a religion that explicitly celebrates sex. For this reason, Sutric opposition to Tantra makes emotional sense to Westerners. Sutra’s advocacy of self-denial resonates with comfortable Christian themes.

Modern Tantric Buddhists (Asian and Western) have to deal with widespread wrong ideas about Tantra that come from this quasi-Christian interpretation. In many cases, they have responded by downplaying the parts of Tantra that conflict with Christian values. They have been too quick to say “No, that is slander, we don’t worship women, we don’t hold revolting rituals, we don’t practice ‘Tantric sex,’ which doesn’t exist; Tantra isn’t like that, it is all completely respectable.”

This is politically convenient when defending Tantra, but not really accurate.

Tantra really can’t be made respectable. Liberation from social expectations is an essential method and result of Tantra. Given Western religious freedom, it should no longer be necessary to pretend otherwise.

In the 1970s, some Westerners decided that a religion that was all about sex sounded jim-dandy. They developed “Western Tantra,” incorporating sexual techniques they learned from Hindu gurus. Western Tantra generally combines these methods with “New Age” views. Most Westerners’ ideas about “Tantra” come mainly from this.

In many English-language books on Buddhist Tantra, you read a ritual denunciation that goes something like this:

New Age “Tantra” has nothing to do with the real thing. It is completely inauthentic and just made up. It is all about seeking pleasure, which is very bad and not at all what real Tantra is about. Popular ideas about Tantra are all wrong, due to getting the Western nonsense mixed up with the real thing.

This is part of the defensive strategy of making Tantra look respectable. It is true that Western sexual Tantra is different from Buddhist Tantra, and this can be a source of confusion. But it should not be necessary to denounce Western Tantra to defend Buddhist Tantra; and those who denounce it usually know little about it.2

This causes new forms of confusion. When you make accurate but politically inconvenient statements about Buddhist Tantra and sex, it is common to be dismissed in an particular irritable, superior, and weary tone. (“How sad that we respectable Buddhists still have to deal with these distortions.”) The accusation is that you have a superficial misunderstanding, based on knowledge only of Western sexual Tantra, not “the real thing.” Such criticisms are often made by people whose knowledge of Buddhist Tantra is in fact superficial, and based on a cleaned-up export version.

The essence of Tantra

In the time The Vetali’s Gift is set, it appears that the essential Tantric practice was drinking the mixture of semen and blood produced by sex between a man and a menstruating woman.3 Why anyone thought would that have interesting effects is unclear. Perhaps it was just supposed to be disgusting.

A hundred years later, quite different sexual practices appeared: the ones now loosely called “Tantric sex,” or somewhat more accurately karma mudra. I suspect one reason was that the results of drinking sexual fluids did not quite live up to the claims of the Tantras.

To be fair, the sexual slurry was supposed to be magically transformed and potentiated via ritual, mantra, and divine intervention. Whether that works, I don’t know. If anyone still practices it, I haven’t heard about it.

In The Vetali’s Gift, the ritual transformation does produce a fluid “essence” with magical properties. To hedge my bets, I’ve tried to make this essence delightfully disgusting, too.

My dakinis refer to “karmamudra,” but that is probably an anachronism. At the time, Tantric sexual practice seems to have been called mithuna; but that just meant “sexual intercourse” in general, rather than a specifically religious practice.

Inner Tantra is completely permeated by sex, but mainly indirectly.

Romance novels may be a good analogy. A romance novel is, in a sense, entirely about sex. That is the pervasive theme; everything else points toward it. However, there might never be any allusion, even the most delicate and indirect, to any sexual act anywhere in the book. There is a wedding at the end, and obviously the marriage must be consummated, but that may never even be hinted at. Alternatively, a romance novel may have sex scenes, sometimes entirely explicit; but they will not be more than about ten percent of the text. (If a book is half sex scenes, it is pornography or “erotica,” not a romance. This is not a value judgment, simply a distinguishing feature of these genres.)

In a romance novel, sex is given meaning only by the context: the relationship of the protagonists, and their shared history.

Similarly, sex is a pervasive theme of Buddhist Tantra; but it is meaningful only in the context of the Tantric “view,” or way of looking at the world.

Tantric Buddhist sexual practices are supposed to be extremely secret. (Here I am speaking of the later “karma mudra” methods, not the drinking of sexual fluids.) Secrecy was necessary when Tantra was particularly persecuted. I think it is mostly no longer functional. However, I respect those who believe secrecy is still important. I can assure them that The Vetali’s Gift does not reveal anything about karmamudra techniques, or other Tantric secrets. It is a romance novel, and also a Tantric novel, and so it is all about sex. It has some sex scenes, in a quasi-Tantric context; but there is no “Tantric sex.”

The novel describes other things that sound like Tantric practices, but I have fictionalized details. I hope some readers will be inspired to investigate the possibility of actually practicing Buddhist Tantra. For that, you really need help from a teacher. You can’t learn any sort of Tantra from books—much less from a silly web site.

‘Tantra’ as a modern Western sexual and spiritual practice, however complex and contested its origins in Asia, was and is more than a fringe phenomenon of the 1960s and 1970s counterculture. On the contrary, it took up themes of considerable depth and significance within Western culture, and synthesized them creatively with borrowings from Buddhist and Hindu sources. Its slow but steady growth since the 1970s suggests that its potential has not yet been exhausted, and I would contend that to dismiss it as an empty and superficial expression of the “spiritual logic of late capitalism” is to miss the possibility of a development of real value. (Tantric Revisionings, p. 360)