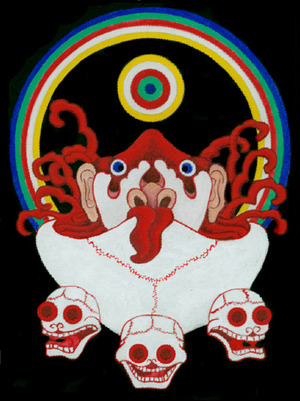 “It tastes like an embalmed corpse,” announced Ngakpa Trögyal, uncorking the bottle.

Ngakpa Trögyal is a specialist in the wrathful practice of Dorje Phurba—and also a hospital emergency doctor. The bottle was Ardbeg 10-Year—a Scotch whiskey I had never heard of.

He poured some for each of us. “Take a swig and hold it at least sixty seconds before swallowing. Its taste will change several times in your mouth. At first there is a rotten taste, like a decomposing corpse. After it passes, there is the strong chemical taste, like the stuff they use to clean hospital floors. That’s the embalming fluid…”

Ardbeg is delicious and disgusting at the same time. Accepting that life often seems like that takes you some interesting places.

The function of disgust

Disgust has a valuable natural function. It evolved to stop us from touching, and especially from eating, infectious substances. The things that naturally disgust us are likely to contain germs or parasites: bodily fluids, secretions, and wastes; corpses; open wounds; and worms and bugs (which might be parasites, or transmit parasites).

Religions co-opt this natural function for their own purposes. Whatever a religion disapproves of, it declares “impure,” and it persuades you to transfer your disgust from infectious substances to that. Anything “immoral” (even if harmless) is made disgusting. If a religion wants to stop you from having sex, it tries to associate sex with “dirt” and “defilement,” and draws connections between sex and excretion. Some societies suffer from elaborate, rigid systems of taboos. They require constant paranoid effort to avoid ritual contamination from perfectly harmless substances, creatures, thoughts, or acts. Many societies declare some people to be impure. Then it is supposed to be moral to mistreat and exclude them.

Some forms of Buddhism use disgust in this same way: to deter you from anything that interferes with their approach to Buddhism. For example, monks are taught to suppress their sexual desire by visualizing women as rotting sacks full of revolting substances.

“There is no purity and no impurity.”
—The Heart Sutra

Other Buddhist approaches, such as Dzogchen, do just the opposite. They deliberately break down the pure/impure distinction. They seek to free us from all artificial social restrictions. When we no longer divide the world into pure and impure, we can experience everything in our lives as sacred.

Eating and drinking supposedly-disgusting things was a main practice of early Buddhist Tantra. The essence of its primary ritual—ganachakra—was drinking a sacred mixture of semen and menstrual blood. (See Ronald Davidson’s Indian Esoteric Buddhism and David Gordon White’s Kiss of the Yogini.) Other disgusting substances were also consumed. Recognizing all reality as sacred, as inherently pure, was not the only point of this practice—but it was a significant one.

During the past thousand years, tasty substitutes have almost always been used in place of the disgusting substances called for by ganachakra ritual texts. The ritual became “symbolic,” which is reassuringly hygienic, but in some ways a pity. Working with disgust is no longer a main practice of Tantric Buddhism. That’s a lost opportunity. In Tibetan Buddhism we often speak of going beyond pure and impure—but unless we actually do it, this may be no more than pious sentiment.

My Buddhist vampire novel The Vetali’s Gift, set in the early days of Tantra, frequently blurs the line between disgust and delight. Cannibalism and necrophilia—delight in the disgusting—are major themes in horror fiction; in early Tantra; and in The Vetali’s Gift.

Wrathful practice is the Tantric method of deliberately causing negative emotions in yourself so you can work with them. It is called “wrathful” because anger is the emotion most often worked with this way. Raising anger is dangerous. It can easily get out of control, and when it does, it can harm others.

Working with disgust is a much safer form of wrathful practice. It is easy to deliberately cause disgust in yourself. Disgust is unlikely to snowball. Disgust directed at other people is harmful, but disgust at unusual foods won’t cause trouble for anyone but you. Transforming disgust can, then, be a useful preparation for practicing with more dangerous emotions.

Different societies have different ideas about what is disgusting to eat. This means there are many things you can taste that may be powerfully disgusting but are perfectly safe. Unlike our ancestors, we have an accurate knowledge of what substances can cause disease. We no longer need disgust. With practice, we can learn to drop it: both socially-taught disgust and natural disgust. This is a valuable “sandbox” or “laboratory” for letting go of negative emotions generally.

Buddhism on the edge

When learning anything difficult, you have to ride your edge. You need to go to the limit of what you are capable of, and occasionally over the edge, in order to progress. When learning to let go of disgust, you can start with the foods you find least disgusting, and work up.

“Disgusting” here is not about tasting bad. People have authentically different food likes and dislikes. If you have often tried broccoli and know you just don’t like it, eating it is not the method. “Disgust” is about visceral, irrational horror. A good place to start is with something you have never tried, because it seems like it would be horrible. That will be different things for different people. (You could try Ardbeg…)

I have had three different kinds of experience when trying foods that are taboo in my culture. The first is that they genuinely taste bad. (Natto, a Japanese sticky bean paste, is like that for me.) Another possibility is that they are delicious once tried. (Lots of sea creatures are in this category, like bay bugs.) The third possible experience is that the food remains yummy and disgusting at the same time. This is the most interesting and useful outcome, because it gives frequent opportunities to ride the edge between disgust and delight. I recently discovered a Hawai‘ian food called poke. It is a mixture of coarsely-chopped raw fish and seaweed, with a smoky, slimy, sticky sauce. It is scrumptious—and each time I put a bite in my mouth I wonder if I will retch.

In the Aro tradition, we are encouraged to eat as many animal species as possible. The esoteric reason is that they will become our students in future lives. A present-life reason is to eliminate any idea of personal purity based on diet (Aro students cannot be strict vegetarians), and to work with our own feelings of disgust. Among other creatures, I have eaten dried scorpions (crunchy but tasteless); donkey (OK, but horse meat is better—especially good raw), and sea urchin reproductive organs (available in better sushi bars—exquisite if fresh, and quite nasty if not).

My personal edge is insects. When I was in Thailand, there were street vendors selling fried grasshoppers and cockroaches. I knew that as a Tantrika I really ought to try some, but I chickened out. Maybe next time will be different.

Because reality is infinitely pure
Discrimination is unnecessary
And we remain serene.

—Düdjom Rinpoche, in The Drinking Song

Buddhist emptiness meditation (shamatha or shi-nè) synergizes with disgust practice. Shi-nè is the practice of letting go. In this meditation, we drop whatever mental reactions arise, over and over. This practice lets us stop imposing meanings on our experience. Normally, we constantly interpret everything as meaningful in some way. The more we practice shi-nè, the more we can simply allow things to be as they are. Disgust is an imposed meaning. Nothing is inherently disgusting, or impure, from its own side. Experience of shi-nè helps us let go of disgust.

Repeatedly discovering that our concepts of particular foods as disgusting had no basis in fact helps us see the arbitrariness of our interpretations. That feeds back into shi-nè practice. If we are wrong about something so primal as the disgustingness of bugs, we realize we may be wrong about other basic “facts” of reality.