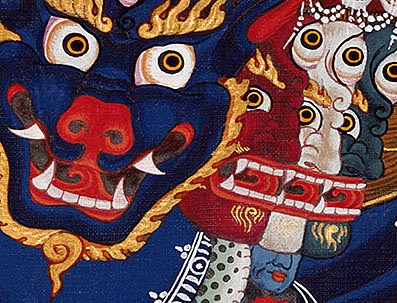 The “Buddhism” in this book was never anyone’s religion. Still, it may have entertainment value—or even educational value.

“Buddhism” is not one thing. It is a family of religions that are as different as Catholicism, Mormonism, and Unitarian Universalism. Buddhism has been quite different, in theory and in practice, in different places; at different times; and according to different “schools.”

Several forms of “Buddhism” appear in The Vetali’s Gift—but none of them corresponds exactly to any religion that has actually existed. The novel describes fictionalized versions of Buddhisms found in north-eastern India around the year 700. I have constructed these from several sources:

This mixture makes “a Buddhism that never was.” That is important to understand, particularly if you are a Buddhist yourself. The Vetali’s Gift is a work of fantasy fiction; if it seems to contradict what you understand about Buddhism, that is likely the reason.

On the other hand, the book is loosely based on the Vajrayana Buddhism of the period—with elements of later Tibetan Buddhism added. Many aspects of Vajrayana Buddhism (Tantra and Dzogchen) are little-known and oft-misunderstood in the West. If you find aspects of the story intriguing, they may reflect authentic Buddhist themes that you can learn more about elsewhere.

Tantric Buddhism is particularly concerned with “magic.” The Sanskrit word siddhi means “magical power.” Within Buddhism, there is absolute and relative siddhi. Absolute siddhi is the magic of enlightenment. Relative siddhi is magic as found in fairy stories and swords-and-sorcery novels.

In The Vetali’s Gift, such magic works. In particular, “black” magic—necromancy, demonology, spells of disease, destruction, and death—works. (In reality, I am quite sure it doesn’t.) Black magic makes for a good story. It provides a cheap source of dramatic tension. I can throw magical perils at my characters without having to invent plausible explanations; and they can always be rescued by magical means when necessary.

More seriously, it lets us explore various genuine ethical issues, without going to the work of setting up realistic situations in which they would arise. Ultimately, I believe that ethical questions can’t be separated from their concrete circumstances. However, reading fiction, and reflecting on it—conceptually and non-conceptually—can be a useful source of ethical insight and inspiration.

It is best to assume that everything in the novel is purely fictional. However, I hope to provide some educational value. I discuss the novel’s Buddhist themes in the metablog and essay sections. There I try to present real-world Buddhism and history accurately; to explain my sources; and to separate fact from fantasy.

Where I am unclear or incomplete, and you would like to know more, please ask for references or clarifications. I will do my best to answer, or to point you to sources who can.

If you have a Buddhist teacher you can rely on, however, it would be best to ask him or her. I am “some guy on the web,” not a teacher.