According to folk Buddhism, karma is enforced by an incompetent police-state bureaucracy. 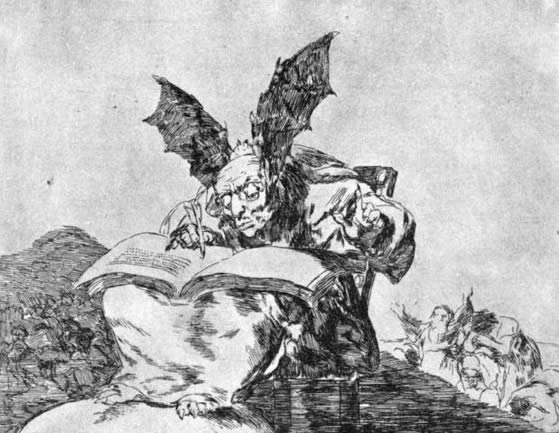 I’ve just finished reading Bryan Cuevas’ Travels in the Netherworld, a book about deloks. A delok is a Tibetan who has died, gone to hell, and returned to life, a few days later, in the same body. (Or so goes the story.)

After dying, a delok passes through the bardos, or “intermediate states,” before reaching Hell. In Hell, the delok witnesses the horrifying suffering of souls tortured for eons by demons as punishment for their sins in earthly life. Then the delok is brought to the court of Lord Yama, the King of Hell and judge of the dead. They watch as Yama accounts, to other dead souls, for the sins that justify their specific sentences in various of the sixteen hell realms. When it comes time for the delok’s own sentence, Yama, for one reason or another, sends them back to their previous, recently-deceased body. The delok, returning to life, has undergone a transformative spiritual conversion. Typically deloks become itinerant preachers, terrorizing and inspiring ordinary Tibetans with their stories of sin, judgement, salvation, and damnation.

Generally, a re-animated corpse counts as undead; anyone who has come back from the dead is some kind of ghost or zombie; and they are generally malevolent, magically contaminating, and feared. Deloks argue (on reasonably solid theological grounds) that they are not undead. Not everyone is convinced; often they are suspected of being actually rolangs: Tibetan vampires. For this reason, Travels in the Netherworld has an excellent section on rolangs, with numerous footnotes, which is mainly why I was reading it. Its description of Yama’s court is, perhaps, even more interesting, though.

American readers will be familiar with the TSA’s No Fly List. (Stay with me; this will turn out to be relevant.) The No Fly List was instituted after the 9/11 terrorist attacks. According to the TSA, it “keeps known terrorists off planes.” How it works is secret and details are unclear. Generally, any of the American security agencies can add names to the list of people who might be associated with terrorism in some way. There appears to be no defined procedure for removing names from the list, or specific criteria for adding them. Every air passenger’s name is checked at boarding time, and if their name is on the list, or similar to a name on the list, they are not allowed to fly.

A sensible security precaution, probably, but one that relies on a competent bureaucracy to function well. The administration of the No Fly List has been criticized. Known terrorists have been allowed to board despite being on the list, or because they were not put on it. Conversely, tens of thousands of people who are not terrorist suspects have been prevented from flying because they have the same name as someone on the list, or a name vaguely similar to someone on the list. Such “false positives” have included several U.S. Congressmen. (Whether or not the person on the list was actually a likely terrorist is a whole ’nother question. There is evidence that the Bush administration added many Americans to the list who were simply democratic political opponents, not legitimate terrorist suspects.) Since there is no way to find out why your name is on the list, or to get yourself off, this can all be quite inconvenient.

Why would Yama send people back from the dead?

According to folk Buddhism, he runs Hell as a vast documentary bureaucratic police state, employing endless demonic scribes to keep track of everyone’s sins. A common reason to die unexpectedly is that your name is, say, “Pema Wangdrup,” and someone else named “Pema Wangdrup,” or maybe “Pema Wangchuk,” has been quite naughty, and “exhausted their good karma.” The other person’s time is up—but there’s a bureaucratic mix-up. Some lame-brain minor demon gets the paperwork snafu’d, and you are the one who dies and gets sent to hell. This can be quite inconvenient. (For you. Pema Wangchuk is probably pleased to continue with dissolute carousing.)

Bureaucratic police states being as they are, your chances of convincing the netherworld authorities that they have screwed up are so-so. However, Yama does sometimes recognize an error on appeal, and puts you on the next flight back to the realm of the living. And that is one of the main reasons there are deloks.

(Fortunately, these folk beliefs do not accurately reflect scriptural theory…)