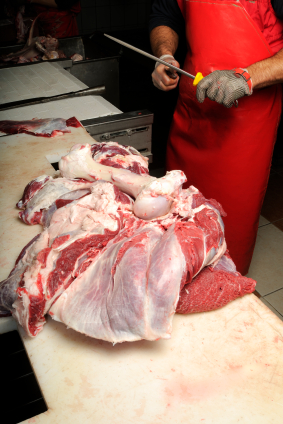 The “Four Thoughts That Turn the Mind to the Dharma” is one of the most tedious of Buddhist teachings.

Let’s see if we can kick it up a notch…

Sooner or later, everybody is just someone else’s meat.
—Anita Blake

If you unexpectedly discover that you are minor character in an Anita Blake novel, you know that you are likely to be eaten alive by a zombie on page 237.

A cancer is essentially a zombie—a mass of human tissue that should be dead and isn’t.

“The history of human beings has been not as hunter-gatherers, but as hunted-gatherers.… We lived in intimate proximity to large, hungry predators that, in many instances, feasted directly upon us. We have been, for the vast majority of our time on this planet, cat food.”
—Frank Forencich, “Sculpted by Cats,” in Exuberant Animal

Among the earliest forms of human self-awareness was the awareness of being meat.
—David Quammen, Monster of God

We evolved as predators—as monsters of God—but also as prey.

Being eaten alive is the normal way for animals to die. Even when the cause of death is disease or injury, most animals, weakened, get eaten before the end.

For Buddhists who seek awareness, a walk in the woods may be helpful:

A woods with a bear in it is real to a man walking through it in a way that a woods with no bear is not. [One] who survived a serious attack described the moment when the bear had him on the ground: “He laid on me for a few seconds, not doing anything… I could feel his heart beating against my heart.”

A few days ago, I woke to find that it had snowed in the night. When I opened the garage to put the garbage out, there was a trail of bear paw-marks that led up to the door. Evidently the bear had stopped just outside, sniffing the air. Judging from the snow-track, my garbage was not especially appetizing. The bear turned and went up to the next house, where it tore the garage door to splinters and had a messy midnight snack.

Ian Frazier was my babysitter when I was a tot and he was a teen. Apparently I once announced to him, with great seriousness, that “Some people believe in God, but I believe in gasses.” Presumably my four-year-old opinion concerning cosmogenesis was not particularly well-founded. Yet I have never since wavered in my conviction for gasses over God—and for meat over souls.

Being meat heightens appreciation of reality in other ways as well:

“They’re made out of meat.”
—Terry Bisson