Next time you die 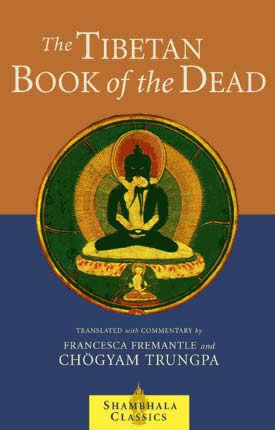 About death, the one thing to know is: “Next time you die—pay attention!”

That sounds ridiculous when the aged, possibly insane narrator of The Vetali’s Gift says it. This is supposed to be the death part of the great Secret of Life and Death? It’s absurdly simple, and what has it got to do with anything? Either he’s gone senile, or it’s a joke.

Whose joke? His or mine? Or hers? Not everything is as it seems… Maybe the joke is on you?

“Next time you die, pay attention” is the essence of the The Tibetan Book of the Dead. And it might be good advice even if you don’t believe in rebirth, and expect to die only once.

The Book of the Dead is a queer, jumbly book. Or books.

…there is in fact no single Tibetan title corresponding to the Tibetan Book of the Dead… It has been handed down through the centuries in several versions containing varying numbers of sections and subsections, arranged in different orders, ranging from around ten to thirty-eight titles. These individual texts cover a wide range of subjects, including the Dzogchen view, …, meditation instructions, visualizations of deities, liturgies and prayers, lists of mantras, descriptions of the signs of death, and indications of future rebirth, as well as those that are actually concerned with the after-death state.

I find the biggest contrast between the sections written from a Tantric perspective and those written from a Dzogchen one. The Tantric sections are long and complicated, and are about rituals and magic and spirits in the underworld. The Dzogchen sections are short and simple, and describe the nature of awareness, presence, and distraction.

It is the Tantric sections that seem to have made the Book of the Dead successful, both in Tibet and in the West. Everyone wants to know what will happen to them after they die. A colorful and exciting answer, featuring gods and demons and travel to mysterious lands, with a simple moral message, is bound to be popular.

The last words of the great and eccentric physicist Richard Feynman, after a long illness, were “I’d hate to die twice. It’s so boring.” That’s funny, and he probably meant it to be. But it is also sad. He was an immensely energetic and accomplished man. I do not know the detailed circumstances, but I imagine him lying for weeks in a hospital bed, wishing he could be doing something: playing bongo drums, sketching from life, or cracking safes (some of his favorite pastimes).

If he had developed some proficiency in Dzogchen meditation, he would not have been bored, or felt that the end of his life was a waste of time. Simply being—which is the essence of Dzogchen practice—can be as interesting as doing stuff.

Whether you think death comes once or many times, it doesn’t happen very often. You might as well take an interest in the process, and see if you can enjoy something about it.