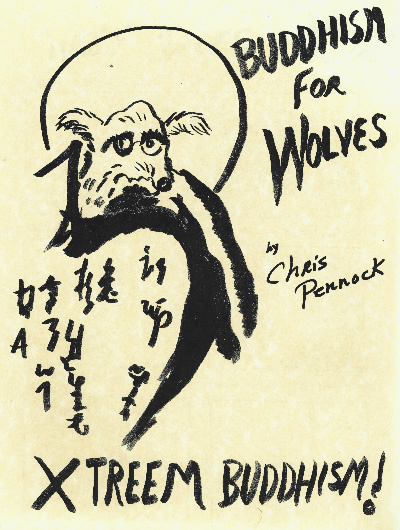 The name of this site was inspired by Buddhism for Wolves, which is a comic book by Christopher Pennock. Chris is one of my “vajra brothers”—he is a fellow student in the Aro lineage.

Christopher Pennock is better known as a stage, film, and television actor. You may know him for his roles in Dark Shadows, the cult horror-soap television series.

Dark Shadows’ Barnabas Collins was perhaps the first vampire ever portrayed sympathetically, as a character one could identify with, or be romantically attracted to—rather than a purely evil, alien other. This theme is the basis of most subsequent vampire fiction, so Dark Shadows is of great historical significance. (Besides being a lot of fun.)

You can see Chris playing the dashing Jeb Hawkes (who is an ancient Lovecraftian horror in disguise) here:

Here’s a tribute video (and see the admiring fan comments on it here) :

Chris tells me that a Dark Shadows movie is now in the works, starring Johnny Depp as Barnabas the vampire, Tim Burton directing. It’s to be released next year. I’m looking forward to it!

Buddhism for Wolves is partly a satire on a rather nasty, but commercially successful, bit of kitsch: Buddhism for Sheep. “For sheep” might serve as the slogan of the nice school of Western Buddhism. I think you know the sort I mean—that spouts platitudes about compassion, while savaging anything it considers Buddhistically incorrect.

Vajrayana—particular the path of wrathful practice—is indeed Buddhism for wolves. Not necessarily predators, but those who are unwilling to pretend to be ordinary and go along with the herd.

Buddhism for Wolves is funny and charming, in a delightfully nasty (but good-hearted) way. You can buy it from Chris’s web site.

Here’s a page from the book: